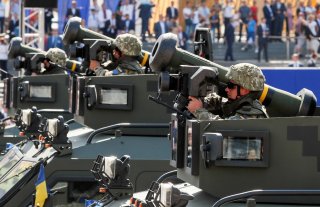 Yesterday, the United Kingdom sent crates of anti-tank missiles to Ukraine in a move meant to bolster the imperiled eastern European country’s defense against a potential Russian invasion.

“Within that same principle, I can today confirm to the House that, in light of the increasingly threatening behaviour from Russia, and in addition to our current support, the UK is providing a new security assistance package to increase Ukraine’s defensive capabilities,” the United Kingdom’s Defense Secretary Ben Wallace explained to British lawmakers yesterday.

“We have taken the decision to supply Ukraine with light, anti-armour, defensive weapon systems. A small number of UK personnel will also provide early-stage training for a short period of time, within the framework of Operation ORBITAL, before then returning to the United Kingdom.”

The eastern European democracy on Russia’s western border fears an imminent Russian invasion. Tens of thousands of Russian troops, including tanks, artillery, armored vehicles, as well as logistical and medical equipment, are massed along the Ukraine-Russia and Belarus-Ukraine border. Perhaps as many as 120,000 troops are at the ready.

The United Kingdom sent the munitions via C-17 cargo planes. Those planes bypassed Germany en route to Ukraine and caused speculation that the Germans had denied the British access to their airspace, perhaps due to German sensitivities regarding the transportation of munitions to a conflict zone.

Given German political sensitivities around conflict and weaponry, it is not inconceivable that the country asked British pilots to skirt their airspace. However, both parties denied speculation that British pilots were barred from German airspace.

In his speech to parliament, Wallace said that “this support is for short-range, and clearly defensive weapons capabilities; they are not strategic weapons and pose no threat to Russia. They are to use in self-defence and the UK personnel providing the early-stage training will return to the United Kingdom after completing it.”

The Prime Minister has been clear that any destabilising action by Russia in Ukraine would be a strategic mistake that would have significant consequences. That is why there is a package of international sanctions ready to go that will make sure that the Russian government is punished if it crosses the line. But the costs of an invasion will not just be felt by the West.”

The United Kingdom’s recent anti-tank weaponry delivery is a strong gesture of support for Ukraine. And while the weaponry augments Ukraine’s capability, it will not be enough to turn the tide in Ukraine’s favor. For that, NATO allies—and in particular the United States—would need to raise the cost of an invasion to Russia concretely.