The United States’ KC-46 Tanker Program Is a Mess 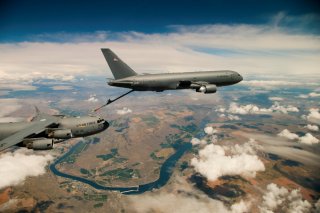 The Government Accountability Office (GAO) submitted a review of one of the U.S. Air Force’s most significant programs, the troubled KC-46 aerial refueling tanker. Their conclusion? Not good.

The report explains that “critical defects with the aircraft's remote vision system and other technologies” will delay the program’s full potential and increase costs.

As an aerial refueling aircraft, the KC-46 extends the amount of time fighter jets, cargo transports, and other planes can stay in the air by increasing their range. However, the tanker has serious issues with its remote vision system (RVS).

“The system's cameras and display allow operators to observe and reposition the boom—a rigid telescope that delivers fuel to the receiver aircraft,” the GAO report explains.

“The RVS currently cannot be used to perform all aerial refueling missions because it does not work in changing lighting conditions.”

Previous boom-type refueling tankers gave operators a direct line of sight with the airplane rather than relying on a closed-circuit video system.

As the GAO report explains, the tanker’s performance has an enormous impact on Air Force readiness, underlining the importance and urgency of finding a solution to the RVS issue.

“The KC-46 tanker is among the Air Force's highest acquisition priorities as it is intended to replace one-third of the aging aerial refueling tanker fleet. Aerial refueling—the transfer of fuel from airborne tankers to combat and airlift forces while in flight—is critical to the U.S. military's ability to operate globally.”

The RVS issue affects not just the United States. As Israel signed a deal to purchase two KC-46s earlier this month, it also wants the issue fixed. The KC-46s would replace the country’s aging tankers and provide Israeli airplanes with much more range during their operations.

The urgency behind the deal is primarily due to Iran’s growing nuclear program. A preemptive strike against Iranian nuclear facilities would require mid-air refueling for the Israeli warplanes to return.

The Air Force would be wise to heed the GAO’s recommendations. Most notably, before approving a remote vision system redesign by Boeing, the Air Force should “assess technology readiness,” establish a “technology maturation plan,” and carry out tests of the prototype “in an operational environment.”

With tensions heating up in Eastern Europe, a reliable and modernized aerial refueling capability is urgently needed. However, it remains to be seen if the beleaguered KC-46 will be able to fill that role.