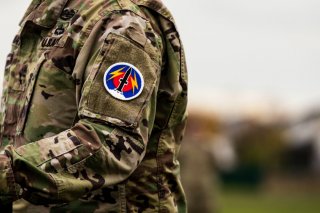 One of the Army’s legendary nuclear missile commands might get some of the United States’ state-of-the-art missiles.

The United States Army officially reactivated the 56th Artillery Command in Germany during a ceremony in Mainz-Kastel, in western Germany.

“The 56th Artillery Command will plan and coordinate the employment of multi-domain fires and effects in support of U.S. Army Europe and Africa and/or a combined joint force land component command,” a photo release covering the reactivation explained. “The Theater Fires Command improves readiness and multinational interoperability by the integration of joint and multi-national fires in theater operations and exercises.”

The command initially stood up in 1942 and fought in Europe during the Second World War, seeing combat in Northern France, Belgium, and Central Europe. However, the command deactivated shortly after the end of hostilities in Europe.

The Army reactivated the command in the early years of the Cold War in 1951 in recognition of the threat the Soviet Union posed to Europe. But, beginning in the early 1960s, the 56th Artillery Command’s role greatly expanded in importance.

In 1963, the renamed 56th Artillery Group took responsibility for the newly-deployed Pershing I missile. The Pershing I and closely related Pershing Ia were one of the Army’s primary theater-level nuclear weapons until the vastly upgraded Pershing II replaced them in the early 1980s.

The Army ultimately deactivated the 56th Artillery Group in 1991 following the collapse of the Soviet Union, the end of Cold War hostilities, and the implementation of the Intermediate-Range Nuclear Forces (INF) Treaty, eliminating Soviet and American conventional and nuclear land-based missiles with a range of 500 to 5,500 kilometers.

However, the Intermediate-Range Nuclear Forces (INF) Treaty collapsed in 2019, providing an impetus for reactivating the 56th Artillery Group.

“The reactivation of the 56th Artillery Command will provide U.S. Army Europe and Africa with significant capabilities in multi-domain operations,” Maj. Gen. Stephen J. Maranian, Commanding General, 56th Artillery Command, explained in a U.S. Army press release. “It will further enable the synchronization of joint and multinational fires and effects, and employment of future long-range surface to surface fires across the U.S. Army Europe and Africa area of responsibility.”

Future long-range surface fires may be a passing reference to two of the Army’s new missiles currently in development: Typhon and Dark Eagle.

Dark Eagle is what the Army calls its Long Range Hypersonic Weapon, developed in tandem with the United States Navy. On the other hand, Typhon is a launcher and control system that will be able to fire a variety of missiles, from Tomahawk to a variant of the Navy’s SM-6 multi-use missile.