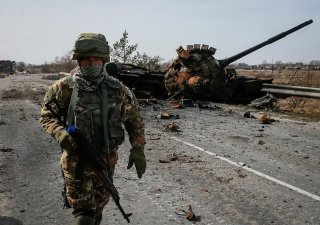 The Russian military is unable to make further progress in its advance on the Ukrainian capital of Kyiv, a senior unnamed Department of Defense official said on Monday.

“[We] assess around Kyiv that Russian forces have not only ceased to make any advances toward the city, but as we said before, are making really no efforts on the ground to advance on the city,” the defense official said.

The defense official said the situation around Kyiv is mostly static, though Ukrainians have attempted to push the Russians back.

Russian forces around Kyiv have been stalled for some time now. Russian air and missile strikes continue to be directed against Kyiv, but Russian ground units have not moved forward. Russian positions north and northwest of Kyiv remain about fifteen to twenty kilometers from the city, while positions to the east are up to fifty-five kilometers away.

“It appears that the Russians are, at least at the moment, not pursuing a ground offensive towards Kyiv,” the defense official said on Friday. “They are digging in, they are establishing defensive positions, they don't show any signs of being willing to move on Kyiv from the ground.”

Several factors have prevented Russia from moving further toward Kyiv. Logistics problems and long supply lines have created shortages of ammunition, food, fuel, and critical equipment. Low morale has been a consistent issue for Russian forces.

Even without those challenges, urban combat in a large city like Kyiv would heavily favor the defender. Ukrainians know the terrain and the configurations of streets and buildings within the city of Kyiv, something defending forces could clearly use to their advantage. Heavy mechanized Russian forces would likely have a difficult time navigating narrow urban areas and would likely be even more exposed to Ukrainian counterattacks.

Ukrainian defenders with shoulder-fired anti-tank and anti-aircraft weapons could easily use building structures, narrowly configured streets, and hidden attack points in buildings to destroy incoming Russian troops. It may be that Russia might simply choose to avoid close urban combat even if they get close enough to attempt it.