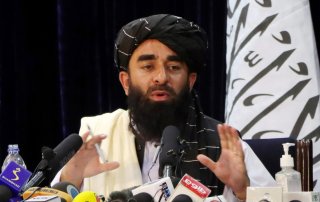 For over a decade, Washington has spoken of the Taliban as a loose band of fighters. This assumption was, and continues to be, false. The Obama administration, for instance, devised a divide-and-conquer strategy to reach the “reconcilables” in the insurgency. To be sure, from building an economy to deterring ISIS attacks, a Taliban government faces steep obstacles. But cohesiveness is not one of them. A brief overview of the Taliban’s internal structure reveals a meticulous but flexible approach that Washington must reckon with to avoid being once again blindsided by the group’s advances.

Take the Doha Agreement, for example. During the negotiations, Haibatullah Akhunzada, the amir of the Taliban, strengthened the insurgency’s traditional consultative process by consistently deferring to committees. These consultations demonstrated that Taliban leadership can discuss disagreement within a framework without fear of retaliation. Though the amir is the supreme ruler, critical decisions like peace deals don’t occur without a dialogue.

Even the choice of who would lead the agreement wasn’t without thought. Mullah Ghani Baradar’s appointment to the Doha political office garnered the respect of rank-and-file members, signaled to the United States the group’s seriousness for a deal, and showed Pakistan’s interests in improved relations. What about in the lower ranks? One United States Institute of Peace paper by Ashley Jackson and Rahmatullah Amiri analyzes that structure too. At the local level, provincial (akin to state) governors appoint district governors. District governors oversee military tactics, resident complaints, and civilian commissions. While civilian commissions (akin to departments) had always existed, the Taliban have placed them at the forefront of community negotiations in hopes of greater impacts in sectors like education, health, and nongovernmental organizations. Oversight by top leadership is hands-off unless necessary: the provincial governor can argue against policy implemented by higher authorities, and the Rahbari Shura, the Taliban leadership council, is not directly involved in the appointment of district governors.

Jackson and Amiri further discuss how civilians in these positions work with the military side, but the implementation of these policies can remain independent. Regarding education policy, for example, local leaders are authorized to challenge military actors worried about anti-Taliban ideals in classrooms.

Of course, the structure is far more complex on the ground than on paper, and it differs from sector to sector. But keeping a general blueprint avoids conflict, decentralizes power, and keeps the military and civilian sides on equal footing. When asked about such reforms in 2018, one Taliban official asserted that “we needed to show we could be accountable and could form an accountable government that everyone could accept.”

The Doha Agreement process and subnational reforms show the Taliban has adapted to geopolitical changes. To ignore this fact means re-committing mistakes like attempting to produce dissidents among its ranks. Fortunately, there are three ways to keep the Taliban structure in mind if Washington decides to engage its government, diplomatically or not.

First, U.S. policymakers should understand that local leaders are in some ways more powerful than the Taliban central government. The Rahbari Shura cannot oversee the 70 percent of Afghans who live in the countryside, so it relies on appointed officials like the district governors. And these governors are more accountable to the provincial officials than the amir. What would cause a district governor to argue against central policy? Money? Lack of resources? By answering these questions, the United States will gain insight into the causes of bottom-to-top conflicts.

Second, as Bill Roggio, managing editor of the Foundation for Defense of Democracies’ Long War Journal, argued, “We never understood the Taliban's singular goal of reestablishing the Islamic emirate.” Had the U.S. government better understood the Taliban’s structure, it would’ve known that the policy process, from consultation to evaluation, reflects an Islamic model. The jirga, the traditional form of assembly leaders common to Pashtun, predates modern law but more importantly, mirrors the consultative methods of the Rahbari Shura. To determine the policies of a Taliban government, Washington must study these deliberative processes.

Finally, the United States needs to acknowledge that the Taliban is no longer the Pashtun ethno-nationalist movement from the 1990s. Indeed, according to Foreign Policy, the Taliban’s expansive recruitment of Uzbek, Turkmen, and Tajik Afghans “have given the militant group the ability to seize territory in areas outside of its traditional power base.” This strategy, too, was no accident. The Taliban tailored recruitment messages to play on minorities’ financial and political grievances towards the Afghan government. One of these Uzbek recruits was appointed as a military chief in several districts after only two years, allowing him to recruit members exponentially—like a pyramid scheme. How long the Taliban will keep these groups under this manufactured Islamic banner, no one can say. But if U.S. policy accounts for these ethnic differences within the Taliban structure, it can predict fractures here and there.

Whatever the future of its Afghanistan policy is, Washington must go beyond the “loose fighters” perception by examining the Taliban’s bottom-to-top conflicts, studying its deliberative processes, and predicting its ethnic structural fractures. Then, it should apply those analyses towards better anticipating Taliban government policies. To do otherwise means re-committing past mistakes.

Sam Abodo is an undergraduate student at Carnegie Mellon University’s Institute for Politics and Strategy and an editorial intern with The National Interest.