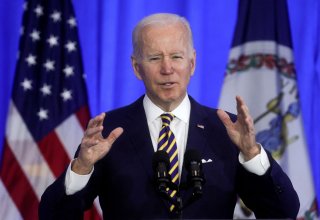 Progress in the global fight against corruption has been underwhelming at best. Transparency International—the preeminent global civil society organization that fights corruption—marked the release of their annual index last month by noting that 86 percent of the world’s countries have either declined or stagnated in their efforts to curb corruption over the past decade. With little to show for the billions spent tackling graft, some are asking whether all has been for naught.

The chatter has not gone unnoticed in Washington. In December 2021, the Biden administration released a U.S. strategy for combating corruption, elevating the issue to a core national security concern. Acknowledging the shortcomings of prior efforts to tackle corruption, the White House has called for a new approach and admirably positioned the United States to prioritize anti-corruption efforts.

Nevertheless, the strategy veers more toward sentiment than substance. While stemming illicit cash flows is rightly given attention by the administration, more action is needed upstream in the developing world and emerging markets. In these countries, weak governance, fledgling institutions, and natural resources combine to form a wellspring of corruption. It is unsurprising, then, that dirty money works its way into the global financial system, distorting and destabilizing Western economies to the disadvantage of its citizens.

Though foreign assistance is highlighted in Biden’s strategy, details remain sparse. The United States ought to be more forthright: if a partner government has proven its anti-corruption commitment in word and deed, support—financial and diplomatic—should follow. Because once these partners take aim at public sector corruption, the corrupt will naturally clap back. Well-funded for the reason they are pursued, these individuals and their offshoots retain a clear motive to destabilize at will.

Take South Africa. President Cyril Ramaphosa led an earnest campaign to address systemic political corruption and restore integrity and credibility to South African institutions by overseeing the State Capture Commission, a public inquiry into public sector fraud in South Africa. But when Jacob Zuma was jailed last year (though later released), coordinated unrest broke out across the country in some of the worst violence experienced since the fall of apartheid. Ramaphosa’s anti-corruption measures were consequently blown off course.

Neighboring Malawi may offer the United States an opportunity to test a more fruitful approach by leveraging “increased critical assistance … to new democratic and reform-minded regimes,” as the White House strategy puts it. Last month, President Lazarus Chakwera of Malawi dissolved his entire cabinet after corruption charges were leveled against select officials serving in his cabinet. This followed the arrests of the former finance minister and the former central bank governor in December. That allies and former incumbents were pursued equally has undermined the opposition’s cries of a witch-hunt and given credence to Chakwera’s anti-corruption bona fides. After sweeping to power in a historic rerun of an election ruled fraudulent by the courts, Chakwera appears to be making good on his promise to clear the rubble of corruption in Malawi.

But despite his decisive actions to stamp out corruption, the president has earned only faint encouragement from U.S. officials with the embassy in Lilongwe welcoming “the bold steps” but saying little more. For Chakwera to continue his anti-corruption drive, his efforts must include broad-based economic development. Otherwise, discontent risks being co-opted by the corrupt, undermining the country’s anti-graft and democratic campaigns in the process.

This is where Chakwera’s hands are tied—and not just once but with a triple inheritance from his predecessor’s administration.

Not only were state institutions hollowed out by the prior government, but its corruption choked off donor funding—including that of the world’s foremost international financial institution, the International Monetary Fund (IMF). The unsustainable debt passed along to Chakwera has led to repayments that severely impede his administration’s priorities and constrain his ability to deliver important reforms. Without these changes, Chakwera is unlikely to retain popular support.

The United States can extend a hand. The Malawian government is negotiating a new deal with the IMF. As the largest lender to the multilateral institution (and therein controlling the most votes), the United States can help accelerate the agreement. That loan would not only bring relief, but act as a green light for foreign direct investment. Without it, doubts over risk will limit new entrants into Malawi’s market.

Such measures, which are in keeping with the newly released U.S. strategy, would serve to reinforce Chakwera’s anti-corruption endeavors. While some in the private sector are well-acquainted with the greasing of palms, most—particularly those that would not enter without a signal from the IMF—demand higher standards to ensure that graft does not undermine market fairness. A more competitive economy acts as a counterweight to corruption.

However, multilateral institutions cannot expect a government to solve corruption without funding. Fighting graft is about momentum. An excessive need to account for every penny of aid is self-defeating: vested, crooked interests hold the upper hand against broken administrations, reform-minded governments are voted out if they do not deliver broad-based change, and underfunded institutions breed corruption as a means of getting by. And when corruption is not solved, its long-term costs eclipse those that may be lost to it in the shorter term.

To be effective in their efforts to curb endemic political corruption, the Biden administration and international institutions more broadly are wise to support efforts to bolster economic growth even as they preserve and enhance existing multilateral anti-corruption architecture.

Yet a reductionist approach that focuses purely on anti-corruption measures in a vacuum is unlikely to deliver positive results. Only when the big picture is understood can the problem of corruption—with its wide-ranging consequences across the globe—truly be addressed.