The United States Needs to Keep Maximum Pressure on Iran 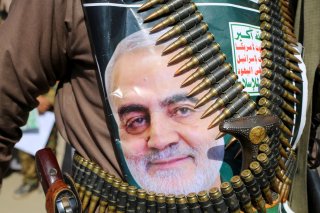 Iran has emerged as a regional epicenter of the devastating coronavirus pandemic, with more than 4,000 people reported dead, multiple senior leaders among them. This catastrophic public health emergency, needlessly worsened by Tehran’s negligence, follows months of setbacks for the regime that have steadily shredded its domestic legitimacy. The United States and its Middle Eastern allies should remain vigilant as Iranian leaders now seek to divert blame from their own failed policies, and prepare for the possibility of increased Iranian aggression in an already beleaguered region.

Critics have accused the Iranian regime of exacerbating the coronavirus crisis by continuing flights to and from China, ignoring early warnings from local health officials, delaying on reporting initial cases, and failing to quickly shut down widely attended religious sites and services. These missteps have not only harmed Iranians, but other vulnerable populations in the Middle East that were exposed to coronavirus carriers traveling from Iran, including in Iraq, Lebanon, and Afghanistan. Authorities are likely also underreporting figures, further suggesting that their priorities lie with containing the public’s criticism, rather than ensuring its wellbeing.

The outbreak’s onslaught comes at an especially tough time for Iranian leaders, who have recently had to contend with nationwide flooding, popular anti-government protests, the killing of Iranian Gen Qasem Soleimani, the Revolutionary Guard Corps’ downing of a Ukrainian airliner, plunging oil revenues, and increased tensions with the United States. These developments have unfolded against the backdrop of a deep economic recession, fueled by the pervasive corruption and mismanagement that have become a hallmark of the Islamic Republic, and worsened by sanctions imposed to counter the regime’s incessant belligerence.

Iran’s current crisis tragically underscores the high costs paid by its people for the misaligned priorities and hegemonic ambitions of their leaders. It also appears to be amplifying tensions between hardliners and so-called “moderates,” with the head of the latter camp, President Hassan Rouhani, facing increasing criticism over his performance and the Iranian Armed Forces being empowered by Ayatollah Ali Khamenei to lead a military response to the coronavirus. The question now is how Iran will move forward—especially amid the ascent of hardliners, who recently won parliamentary elections following a record-low turnout and the disqualification of thousands of candidates.

As U.S. Central Command Commander Gen. Kenneth F. McKenzie has warned, Iran may react to an internal crisis by attempting to consolidate domestic support against a common external foe—one of its tried and true strategies. The Iranian regime has shamelessly suggested that the coronavirus is an American, Zionist plot and vociferously blamed the crisis on U.S. sanctions, which it demands be lifted on humanitarian grounds. At the same time, it has tellingly rejected offers of humanitarian aid from Washington and stuck by the dangerous policies that led to the imposition of sanctions, like backing militias that kill U.S. troops and stonewalling international nuclear inspectors.

Washington should keep offering humanitarian aid to alleviate the suffering of the Iranian people, even when it is rebuffed by Iranian leaders. It could also reassure banks that are reluctant to facilitate exempted humanitarian transactions with Iran due to fear of U.S. sanctions. Yet it must resist calls, whether from U.S. lawmakers or foreign allies, to allow the weakening regime to manipulate this crisis and evade sanctions that have always excluded medical and other humanitarian supplies. Maintaining continued pressure on Iranian leaders, alongside an active information campaign that demonstrates U.S. support for the long-suffering Iranian public, is essential.

The US should expect Iran’s malevolent activities in the Middle East to endure, even as the region is being pummeled by the pandemic and a painful reduction in oil prices. Iranian proxies are currently winning an escalation with U.S. and coalition forces in Iraq, which has only heightened since the spread of the coronavirus. The United States should make clear that it will retaliate strongly to any Iranian or proxy attacks on its forces in the region. It must also preserve a robust deterrent posture, including by ensuring its bases around the Middle East have proper defenses to protect against such attacks.

America’s regional partners, most notably Israel and the Gulf countries, must likewise prepare for the possibility of intensified aggression. Since Iranian belligerence won’t vanish once the coronavirus crisis abates, the United States should also start preparing longer-term measures now. These include replenishing outdated United States prepositioned weapons stockpiles in Israel, which would bolster Israeli deterrence and readiness and thus help defend U.S. and regional interests.

The United States should stand ready to help the Iranian people as they face the ravages of the coronavirus pandemic. It must concomitantly prepare to defend its own regional forces and interests while keeping pressure on the Iranian regime, whose malign behavior must be confronted at every opportunity.