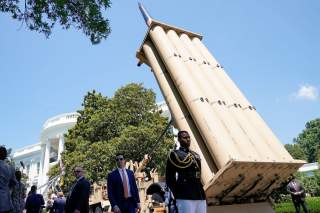 Key Point: The Long Range Precision Fires will be able to target enemies at 500 kilometers.

The Army is working to engineer a sleek, high-speed, first-of-its-kind long-range ground launched attack missile able to pinpoint and destroy enemy bunkers, helicopter staging areas, troop concentrations and other fixed-location targets from as much as three times the range of existing weapons, service officials said.

Kris Osborn became the Managing Editor of Scout Warrior in August of 2015. His role with Scout.com includes managing content on the Scout Warrior site and generating independently sourced original material. Scout Warrior is aimed at providing engaging, substantial military-specific content covering a range of key areas such as weapons, emerging or next-generation technologies and issues of relevance to the military. Just prior to coming to Scout Warrior, Osborn served as an Associate Editor at the Military.com. Osborn previously served at the Pentagon as a Highly Qualified Expert with the Office of the Assistant Secretary of the Army - Acquisition, Logistics & Technology. Osborn has also worked as an anchor and on-air military specialist at CNN and CNN Headline News. This story originally appeared in Scout Warrior. This piece was originally featured in January 2017 and is being republished due to reader's interest.