The Untold Story of the B-21 Bomber (No, Not the New Stealth Bomber) 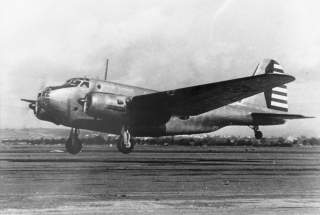 The U.S. Air Force has been especially tight-lipped about the specifics of its upcoming Long Range Strike Bomber. The Northrop Grumman-designed plane doesn’t even have an official nickname, yet. But we do know one thing — its designation. The B-21.

“The designation B-21 recognizes the LRS-B as the first bomber of the 21st century,” the flying branch said in a statement on Feb. 26.

Since 1962, all the branches of the American military have used a single, common set of definitions to build nomenclature for their planes and missiles. Under the system, any new bomber should have been the “B-3,” as it follows the 1990s-vintage B-2 and the B-1 from the 1980s.

Prior to 1962, first the U.S. Army and then the Air Force had used their own nomenclatures. And in that period there was another B-21.

In 1936, North American Aviation designed a medium bomber for the Army Air Corps. After buying a single example for tests, the Army renamed the aircraft the XB-21. Somewhere along the line, the plane got the nickname “Dragon.” And for that reason, some airmen have suggested that today’s new bomber should also be the B-21 Dragon.

But Northrop might not be thrilled at the idea. North American Aviation merged with Rockwell International in 1967 and, subsequently, became part of Boeing, today one of Northrop’s main rivals.

Equally damning, this earlier B-21 turned out to be a painfully expensive failure.

In 1934, the Army Air Corps took the lead in the new global aerial arms race with a new bomber called the B-10. First flown two years earlier, Martin’s single-wing, all-metal bomber was nothing short of revolutionary.

The plane’s two powerful Wright R-1820 propeller engines gave it a top speed of more than 200 miles per hour. While slow by today’s standards, the bomber was faster than any American fighter of the time, to say nothing of other bombers.

But the Army knew it might not hold the advantage for long. American crews were still getting their first B-10s when the Army put out a call for a new bomber that could carry two times as many bombs, twice as far.

Boeing offered the huge, four-engine Model 299. For its part, Douglas combined the wings of its DC-2 airliner with a new, larger fuselage to create the smaller DB-1.

The Army’s flying arm wanted the larger XB-17 — destined to become famous during World War II — but balked at its complexity and price tag. After the stock market crash, the War Department was looking to cut costs.

“Test flights proved the DB-1 to be inferior in almost every respect to the Boeing 299,” aviation enthusiast Joe Baugher wrote in his detailed online database of American military aircraft. “However, the DB-1 did have the advantage over the Boeing design in being substantially cheaper.”

The Army eventually bought hundreds of the DB-1s and renamed them B-18 Bolos. In the meantime, Boeing continued to work out the kinks in its own heavy bomber design.

However, the Bolo’s simplicity meant it was quickly rendered obsolete by other, newer aircraft. Despite its heavier bomb load and greater range, the portly plane was hardly faster than the earlier B-10.

So the Army went shopping again. This time, North American pitched an idea for a new bomber to replace the B-18. After working to solve problems with a shaky tail and overheating engines on its NA-21, the California-based plane-maker turned over the new prototype to the Army Air Corps in 1937. The XB-21 had a top speed of 220 miles per hours and could cruise at 190 miles per hour, all while carrying up to 10,000 pounds of bombs.

“The aircraft exceeded performance expectations and appeared to win the competition with the Douglas B-18A for a production order,” editor Ed Rusinek wrote in the Winter 2005 edition of the North American Aviation Retirees Bulletin. “Price, however, was the determining factor.”

At the time, each XB-21 would cost the Army more than $120,000 — equivalent to more than $1.9 million today. The Bolos were a little more than half that price. Still, the service reportedly had agreed to pick up the lone prototype for a staggering $555,000, according to Rusinek.

More importantly, Douglas’ planes were already in mass production and in service. And the company was quick to offer an improved version with new engines that the military dubbed the XB-22.

The Army was taken with the idea of saving money by simply upgrading the B-18 design. A year after ordering more B-18s, the ground combat branch told Douglas to complete the last 38 aircraft on order as revamped B-23s.

Also called the Dragon, this final version of the Bolo family featured a slimmed-down fuselage, new wings and the engines from the XB-22. The plane boasted an impressive top speed of nearly 290 miles per hour, but only half the bomb load of the older bomber.

When World War II broke out, neither the Bolo nor this new Dragon fared particularly well. Japanese pilots destroyed most of the Pacific-based B-18s on the ground. In 1942, B-18s blew up two German submarines off the coast of the eastern United States in what was to be their only notable contribution to the war effort.

While a few became cargo haulers and trainers, the Army simply abandoned most of the remaining Bolos. Slower and poorly armed compared to the improved B-17s and other newer types, the B-23s were relegated to training and transport duties, too.

In the end, North American turned its failure into success. The company applied its experience with the XB-21 to an entirely new design with the private designation NA-40. The firm came up with an improved NA-62 version at a price point roughly equal to the cost of the dated B-18.

In 1941, what had become known as the Army Air Forces placed the first of these planes into service as B-25s. Rather than resurrect the “Dragon” moniker, the new aircraft carried the nickname “Mitchell” in reference to bombing pioneer and Air Force legend Maj. Gen. Billy Mitchell.

The Army chose the B-25 as the mount for the famous Doolittle Raiders, who flew from the carrier USS Hornet to bomb Tokyo in 1942. The Mitchell became one of the many iconic airplanes of the war.

This article by Joseph Trevithick originally appeared at War is Boring in 2016.