Upgrading The Triad: The Air Force Has Plans To Build 400 Modern ICBMs 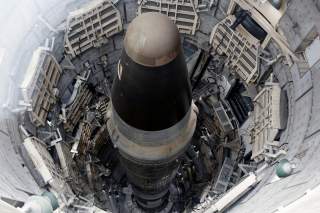 The commander of U.S. Strategic Command, Air Force Gen. John E. Hyten, said the United States has about the right numbers of nuclear weapons, but they need to be modernized.

A Pentagon statement said the General asked reporters to imagine what the world was like in the six years preceding the atomic bombings of Hiroshima and Nagasaki. “In those six years, the world in conflict killed somewhere between 60 million and 80 million people,” he said. “That’s about 33,000 people a day, a million people a month.”

The world has seen bloody conflicts -- Korea, Vietnam, Desert Storm, Enduring Freedom and Iraqi Freedom were awful, but nowhere near the level of carnage the world had experienced, he said.

“The submarines are the most survivable element of it; the ICBMs are the most ready; the bombers are the most flexible,” he said. “When you put those pieces together, it gives our nation the ability to withstand any attack and respond if we are attacked, which means we won’t be attacked.”

The Future of ICBMs:

Although Weinstein did not take a position on the prior administration's considerations about having the U.S. adopt a No First Use, or NFU, nuclear weapons policy, Air Force Secretary Deborah James has expressed concern about the possiblity, in a news report published by Defense News. Limiting the U.S. scope of deterrence, many argue, might wrongly encourage potential adversaries to think they could succeed with a limited first nuclear strike of some kind.