The U.S. Air Force’s New B-21 Stealth Bomber Is Under Construction 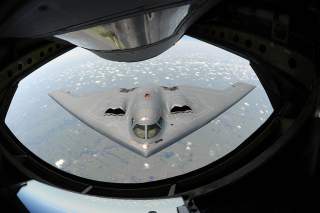 The U.S. Air Force’s new B-21 stealth bomber is scheduled to make its first public appearance in December 2021. But there’s a lot of work to do before the plane can debut.

The U.S. Air Force in 2015 awarded Northrop Grumman a $23-billion contract to develop the new bomber as a partial replacement for the service’s existing fleet of around 160 B-1, B-2 and B-52 bombers.

Many aspects of the B-21’s design remain classified. The Air Force has released a crude artist’s impression of the plane that depicts a flying-wing design that’s similar to the B-2’s design but lacks the older bomber’s serrated “dogtooth” trailing edge.

Northrop added the dogtooth edge to improve the B-2’s low-level performance. The B-21, however, is designed to operate mostly at high altitude, so it doesn’t need the serration.

It’s unclear whether the B-21 has four engines like the B-2 does or just two, Tirpak pointed out. “The consensus among aerospace analysts is that the jet likely uses [Pratt & Whitney’s] F135 engine, which also equips the F-35 fighter,” Tirpak wrote.

Two F135s could generate 56,000 pounds of dry (non-afterburning) thrust, but would require a larger aperture to do so than the four General Electric F118 engines in the B-2, which combine to produce about 68,000 pounds of thrust.

The B-21 is believed to be somewhat smaller than the B-2, with a payload of around 30,000-pounds, just large enough to carry one GBU-57 Massive Ordnance Penetrator precision-guided conventional bomb, the largest in the Air Force inventory.

The Air Force has stated that the B-21, which will be capable of nuclear and conventional roles, would have a pilot-optional mode, effectively transforming it into a remotely-operated drone with the flip of a few switches.

But service leaders haven’t mentioned that feature since 2018, Tirpak noted. That could imply that officials want to keep the capability as secret as possible.

“Air Force leaders have said numerous times that the B-21 program is among the best-run programs in the Air Force, hitting its cost and schedule marks,” Tirpak reported. The Air Force initially said it wanted between 80 and 100 of the new bombers to replace the B-1 and B-2 fleets in the 2030s. That number since has grown.

The Air Force in 2018 announced it wanted to expand its bomber force from nine squadrons to 14. “A bomber squadron’s got about eight airplanes in it,” Donovan told Tirpak, meaning the service could ask Congress for an additional 50 or so B-21s. But Donovan also cited outside analysis that concluded the Air Force needs at least 174 B-21s.

The service expects each bomber to cost around $600 million.

The Air Force is getting ready for the B-21’s potentially decade-long test program. The flying branch reactivated the 420th Flight Test Squadron at Edwards Air Force Base in California to handle the bomber’s trials. That’s the same squadron that tests the B-2.

Edwards’s South Base area is the squadron’s new home. “Satellite images of Edwards reveal a number of new structures in the South Base area, including one building that is about 220 feet square—about the size needed to shelter a B-2-sized aircraft,” Tirpak wrote. “The Air Force has also relocated B-1 and B-52 test activities away from South Base.”

Interestingly, the Air Force plans to share technology between the B-21 program and the parallel Next-Generation Air-Dominance program, which could eventually produce a replacement for the F-22 stealth fighter. The service chose former B-21 program manager Col. Dale White to head up NGAD, Tirpak noted.

Maj. Gen. Scott Pleus, Pacific Air Forces Director of Air and Cyber Operations, floated the idea of basing the new “sixth-generation” fighter design in part on the B-21. “A B-21 that also has air-to-air capabilities” and the ability “to work with the family of systems to defend itself, utilizing stealth—maybe that’s where the sixth-generation airplane comes from,” Pleus said.