The U.S. Air Force Aims to Win the Next War Thanks to Artificial Intelligence 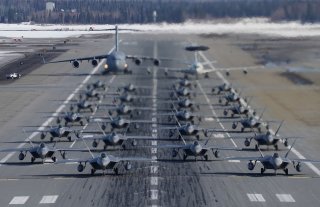 The U.S. Air Force is making a decided move to merge intelligence operations with cyberwarfare and surveillance technology as a way to leverage the growing synergy between them as they pertain to combat operations, tactics and strategy.

The move, which involves a certain blending of the intelligence-focused 25th Air Force with the cyber-oriented 24th Air Force together, rests upon the growing realization that warzone attacks, intelligence operations and surveillance-driven data gathering are increasingly intertwined and interdependent.

“We are taking the network core IT pieces and integrating cyber. Putting cyber with [intelligence, surveillance and reconnaisance] ISR as well resulted in a powerful combination of non-kinetic effects. When it comes to cyber expertise and ISR and intel, you really need both,” Lt. Gen. Jack Shanahan, Director, Joint Artificial Intelligence Center, told The Mitchell Institute for Aerospace Studies in a special video series.

The synthesis of these operations is both ongoing and increasingly necessary given the extent to which, for instance, AI-enabled algorithms already organize, analyze and transmit ISR information with much greater efficiency and speed than humans can. For instance, advanced algorithms can pinpoint moments of tactical relevance from hours of drone-acquired video-feed data to provide timely data to humans, without requiring time-consuming mundane work from human controllers.

This naturally speeds up a sensor-to-shooter time but can also identify patterns and prior circumstances to anticipate where targets or objects of interest might be. Targeting and data acquisition, therefore, is entirely different in this kind of technical environment.

Furthermore, information gleaned or gathered by sensors can be bounced off an existing database, analyzed in relation to known information and properly processed to instantly offer human decision-makers the most impactful data.

Such a technical phenomenon of course relies not only on advanced sensors but also the AI-enabled computer processing power sufficient to organize and process data.

Weapons systems, as well, are increasingly networked and cyber-reliant, a scenario which necessitates the sufficient blending of targeting and intelligence data. Perhaps AI can instantly determine which kinds of weapons are best suited for specific targets by analyzing new data in relation to a previously compiled information to perform the requisite analytics?

Perhaps a dismounted group of enemy fighters is seen on the other side of a mountain, when an overhead surveillance drone captures the video images, resulting in the transfer of data to human commanders? Instead of having data from neary armed ground vehicles or attack aircraft arrive separately through otherwise stovepiped or disparate information channels, a human decisionmaker can see a complete integrated picture by virtue of AI-capable technologies. The group of enemy fighters might best be attacked by a fragmenting canister round from an approaching Abrams tanks, or perhaps a nearby drone armed with Hellfire missiles is best positioned for a strike?

Making the best and fastest decision, with lives hanging in the balance, could all be expedited by the life-saving power of blending otherwise divergent technical applications with AI. An algorithm could simultaneously gather, organize and analyze sensor data from all locations and determine which weapon or method of attack would be optimal for the strike.

Perhaps these kinds of targets were effectively destroyed with certain weapons in previous circumstances? Or specific weather and terrain conditions might change which course of action would be best? Historical occurrences, target scenarios, weapons usage, weather and terrain specifics can all be analyzed in relation to one another, in seconds, making decisions and presenting options for human decisionmakers . . . immediately.