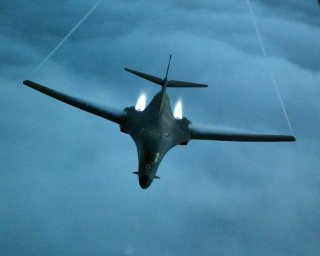 The United States military may have withdrawn from Afghanistan in August, and even as it has continued to focus to address threats from near-peer adversaries including Russia and China, the United States remains fully committed to supporting its allies and partners in the Middle East. To help remind the world of that fact, on Saturday, a United States Air Force B-1B Lancer bomber—commonly known as the “Bone”—took part in a joint patrol sortie, where it was escorted by Israeli Air Force F-15 fighter jets.

The Israel Defense Force (IDF) reported that the flight was conducted as part of the joint strategic cooperation with the U.S. forces in the Middle East.

After passing over Israeli airspace, the bomber also flew above the Persian Gulf and the Strait of Hormuz, which sees the passage of some twenty percent of the world’s oil supplies.

During the marathon flight, B-1B also crossed the Red Sea, the Bab el-Mandeb Strait, and the Suez Canal, while aircraft from Bahrain, Egypt, and Saudi Arabia also provided escort for the U.S. Air Force bomber, highlighting the close partnership that America maintains in the region.

“#StrongerTogether! F-16s from the @BDF_Bahrain flew alongside a @usairforce B-1B in support of a #PresencePatrol mission Oct. 30. The mission is the fifth of its kind in 2021 and was designed to send a clear message of reassurance across the region. @AFGlobalStrike,” the U.S. Air Force Central Command posted via its official Twitter Account on Saturday.

It was likely also a show of strength directed at Iran, which has been blamed on attacks carried out against oil tanks in the Strait of Hormuz. The Islamic Republic has denied being involved in those strikes, but it has vowed to take revenge on Israel for a series of attacks that targeted Tehran’s nuclear program. Iranian state media did not immediately acknowledge the flyover.

This is the first such flyover in the region in recent months. During the Trump administration, there had been a similar pattern of such flights that included nuclear-capable B-52 bombers, and those sorties began after the United States unilaterally withdrew from the 2015 Iran nuclear deal.

President Joe Biden has made attempts to bring the Islamic Republic back to the negotiating table as Tehran continues its advancement towards nuclear capabilities. The flyover after Iran’s Deputy Foreign Minister Ali Bagheri announced that Iran would return to negotiations to resurrect the deal by the end of November. That announcement was made after months of stalled talks between Washington and Tehran.

At the same time, the deployment of the Cold War-era, non-nuclear-capable B-1B sent that “clear message of reassurance” to regional allies including Israel. The bomber had been deployed from the 37th Bomb Squadron based at Ellsworth Air Force Base in South Dakota.