The U.S. Air Force Competition That Gave Birth to the F-16 and F/A-18 Fighters 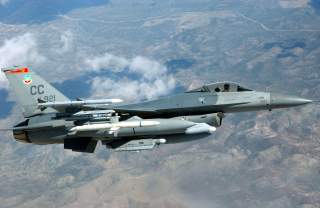 The U.S. Air Force (USAF) Lightweight Fighter (LWF) program sought a small, lightweight, low cost, air superiority day fighter designed for high performance and ease of maintenance. The LWF was initiated because many in the fighter community believed that aircraft like the F-15 Eagle were too large and expensive for many combat roles.

Two aircraft competed one versus the other in the LFW program the General Dynamics YF-16 and the Northrop YF-17.

Two single-seat YF-16 prototypes were built for the LWF competition. The first YF-16 was rolled out at Fort Worth on Dec. 13, 1973 and accidentally accomplished its first flight on Jan. 24, 1974, followed by its scheduled “first flight” on Feb. 2, 1974. The second prototype first flew on Mar. 9, 1974. Both YF-16 prototypes participated in the flyoff against the Northrop YF-17 prototypes, with the F-16 winning the Air Combat Fighter (ACF) competition, as the LWF program had been renamed, on Jan. 13, 1975.

As explained by Lou Drendel in his book F-16 Fighting Falcon In Action, the YF-16 test program, like any program to prove a new aircraft, had it’s share of exciting moments. In two separate instances, test pilots were forced to make dead-stick landings when contaminants in the fuel control units caused the F-100 engine to go to idle thrust.

“One landing was made from 15,000 feet, on the USAF pilot’s first flight in an F-16, and the other from 1,500 feet, shortly after take-off,” says Drendel. “In neither case was the aircraft damaged. As the program progressed, it became increasingly evident that the YF-16 was going to rewrite the book on air combat maneuvering. It was possible to pull so many Gs, so fast, that the normal G-suit pressure regulator could not keep up, and a newer, faster acting regulator that could inflate the G suits at a rate that could keep up with the airplane’s capabilities had to be installed.”

In air combat situations against each other, the two YF-16s actually gained altitude (most dogfights progress to lower altitudes as the fight occurs). “Starting at 15,000 feet, test pilots generally managed to work the fight up to 30,000 feet. Test pilot Phil Oestricher demonstrated consecutive Immelmann turns, beginning at 5,000 feet and leveling off at 25,000 feet. He indicated that a third Immelmann would have been possible,” continues Drendel. “No fighter then in operational service could have performed such a manuever.”

Throughout the entire test program, an extremely high rate of test flights was maintained. In one period 47 flights were flown in 31 days, including 6 flights in one day. Drendel: “This was only possible because of the high degree of reliability of the YF-16’s systems. That reliability was made possible by the fact that many of the systems came from operational aircraft, which also enabled General Dynamics to hold down costs. YF-16s used an environmental control system from the A-7, control actuators from the F-111, the nose wheel from the F-4, main gear wheels and tires from the B-58, an air starter from the C-5, and the ejection seat, air data computer, generator drive and engine from the F-15.”

These factors, combined with demonstrated performance superiority in acceleration and overall in the transonic drag regime, coupled with lower weight and use of the already proven F-100 engine, which was being used in the F-15, resulted in the USAF decision to buy the F-16. The Navy procrastinated, and eventually opted for a version of the YF-17, the F/A-18.

“Much of the resistance to an Air Force buy of the lightweight fighter had centered around the theory that it would only be an American MiG-21…small, with good acceleration and turning capability, but short on range and severely limited in diversity. When the performance of the prototypes indicated that the F-16 would exceed the MiG-21 in all categories, with none of its performance shortcomings, the Air Force did a 180 degree and began to look forward to adding the F-16 to its inventory,” concludes Drendel.