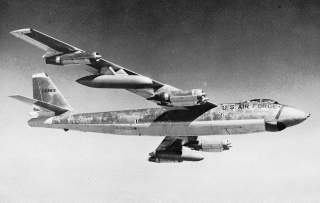 We learned about the Air Force’s quest to build an unmanned nuclear bomber—which the flying branch ultimately abandoned—from A History of the Air Force Atomic Energy Program: 1943–1953, a series of declassified internal studies on the Air Force’s early nuclear history.

The study on Brass Ring describes the 1949 drone effort as the result of a timeless problem—bureaucratic infighting.

After dropping atom bombs on Japan at the close of World War II, the United States began developing much more powerful hydrogen bombs with which to target the Soviet Union.

The Atomic Energy Commission, the powerful agency in charge of weapons design, started working on those bombs but didn’t involve the Air Force— which would have to deliver the weapons to target—in the process.

As a result, the Air Force found itself working on delivery options based on rudimentary—and fluctuating—guesses about the new weapons’ dimensions and effects.

At the time, no one really understood the effects of nuclear weapons. The Air Force’s Brass Ring history says that planners estimated that a hydrogen bomb would produce “an inferno capable of charring wood at 20 miles” and “provoke a small size hurricane.”

And so Air Force designers doubted whether it was even possible for human pilots to deliver the forthcoming bombs and not die in the subsequent explosion.

The flying branch’s problem was a challenging one—to figure out some way to haul a 10,000-pound weapon 4,000 nautical miles, detonate it within two miles of its target and have the whole thing ready in just two and a half years.

An again, the H-bomb delivery system couldn’t have person on board.

The Air Force didn’t think it could develop missiles that could meet the requirement before the deadline. So it tried converting an existing bomber aircraft into a drone, as a kind of stopgap.

The Air Force settled on the B-47 for its drone because of its relatively low cost, durability and availability. Throughout the course of Brass Ring, designers considered three different scenarios for guiding a pilotless B-47 to its target.

One option involved a fully-automated trip under the control of a ground station. Another would see a crew take the aircraft up into the air, set its course and then bail out over friendly territory.

For the final weapons delivery, the Stratojet would either dive toward its target and detonate … or automatically drop the bomb and later self-destruct.

If the plan sounds a little familiar, it should. Project Brass Ring bore a striking resemblance to an earlier attempt an unmanned bombing.

During World War II, the U.S. Army Air Force—the predecessor of the Air Force—had tried its hand at unmanned bombing as part of Operation Aphrodite. The top secret plan involved taking war-weary B-17 and B-24 bombers and stuffing them full of explosives, servo motors and radio control equipment in order to guide the planes from a nearby mothership and crash them into ground targets.

Human crew members were supposed to pilot the bomb-laden aircraft through takeoff and up to an early waypoint, at which they would bail out and leave control of the plane to the mothership.

The plan met with tragedy on Aug. 12, 1944 when Joseph P. Kennedy, Jr., Pres. John F. Kennedy’s brother and the favored son of the politically powerful Kennedy clan, died on an Aphrodite mission.

Kennedy and Lt. Wilford Willy were responsible for taking a PB4Y bomber, a descendant of the B-24, through takeoff from the RAF Winfarthing base in southeast England to its first waypoint. Shortly after takeoff, Kennedy’s plane exploded, killing him and Willy.

But making a bomber more reliable than those involved in Operation Aphrodite was no easy chore. Not long after Brass Ring began, Air Force officials began to experience the headaches familiar to procurement officials throughout the ages.

Boeing, which was producing and modifying the aircraft, and Sperry—the company working on navigational systems to guide the planes—began sparring … and withholding information from each other.

Other problems mounted. Off-the-shelf autonavigators that could guide the bombers the entire 4,000-mile mission were hard to come by—and even harder to develop. The robot aircraft were vulnerable to jamming while under the control of a mothership.

Air Force engineers thought they could mitigate the latter problem by way of a directional antenna.

And of course, requirements-creep set it. By June 1951, scientists at Los Almos had changed their estimates for the dimensions of the H-bomb they were working on.

“The rapid reduction in size of nuclear weapons and the ability to deliver nuclear weapons at low level through the use of drogue chutes ended the problem of escaping the effects of a nuclear blast,” says Col. Sigmund Alexander, a historian and retired airman who has written extensively about the B-47.

The Operation Ivy nuclear tests in 1952 convinced nuclear scientists that it was possible for bombers with human pilots to drop the latest nuclear bombs and reach a safe distance by the time the munitions detonated.

Los Alamos scientists were no longer concerned, as they had been earlier, that drogue parachutes would make the bombs easy pickings for Soviet anti-aircraft fire.

These factors ultimately spelled the end for Project Brass Ring. The Air Force cancelled the effort in early 1953. Col. T.S. Jeffrey, director of strategic combat systems, summed up the flying branch’s doubts about Brass Ring, writing that it “at best provides an operationally unfeasible, undependable and unproven method of delivery of this weapon.”

Having abandoned the unmanned B-47, the Air Force opted to keep the plane as a manned nuclear-capable bomber alongside the B-36.

The Wright Air Development Center at Wright Patterson Air Force Base, which had worked on Brass Ring, realized that the research on unmanned flight and navigation had value outside the context of the current strategic bombing challenges and pressed for continuing the work.

Nonetheless, the Air Force opted to end the research.

Until recently. Today the Air Force is shopping around for a new nuclear-capable Long Range Strike Bomber. There’s speculation that the plane could wind up being “optionally-manned”—that is, robotic with the flip of a switch. Much like Brass Ring’s B-47 six decades ago.

This article by Adam Rawnsley originally appeared at War is Boring in 2014.