The U.S. Air Force Deployed a Surveillance Plane to Ukraine. Here's Why It Matters. 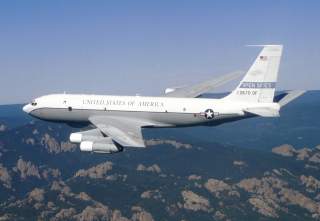 The U.S. Air Force deployed a surveillance plane to Ukraine on an "extraordinary" mission apparently to inspect Russian forces, the U.S. State Department announced on Dec. 6, 2018.

A four-engine OC-135 carried observers from the United States, Canada, Germany, France, Romania and the United Kingdom, according to the State Department.

Both Russia and Ukraine have the right to access the strait leading to the Sea of Azov, under the terms of a 2003 treaty. "We stand with Ukraine against Russian provocative and threatening activity in the Sea of Azov," the State Department stated in its tweet announcing the OC-135 mission.

The OC-135 that flew over Ukraine is one of two surveillance planes that the Air Force operates under the auspices of the 1992 Open Skies Treaty. Republican hawks in the U.S. Congress have fought hard to ground the OC-135s as part of their wider assault on international treaties.

The December 2018 Open Skies flight qualified as an "extraordinary" mission under the terms of the treaty. Open Skies allows the 34 signatory states, including Russia, the United States and most European states, to fly unarmed camera- and radar-equipped planes along pre-negotiated routes over each other’s territory, all for the purposes of monitoring military activities and verifying compliance with other treaties.

“The Open Skies Treaty provides a significant contribution to the security and stability of North America and Europe,” Kingston Reif, director for disarmament and threat reduction policy at the Arms Control Association in Washington, D.C., told the National Interest.

Governments schedule flights on the basis of a complex exchange. Generally speaking, the United States and Russia are each entitled to a handful of flights annually over each other’s territory. But a signatory state can request an "extraordinary" flight over its own territory for the purpose of "conflict prevention and crisis management," according to the treaty.

Ukraine requested the OC-135 flight as a display of solidarity between it and its allies. "The timing of this flight is intended to reaffirm U.S. commitment to Ukraine and other partner nations," the Pentagon stated.

But Open Skies nearly collapsed during the first two years of the Trump administration and unified Republican control of the U.S. government, which will end when the Democrat-majority House of Representatives seats in January 2019.

A contingent of House Republicans, led by Rep. Mac Thornberry of Texas, have worked to undermine U.S. participation in Open Skies, on the grounds that reciprocal Russian overflights of U.S. territory harm America's interests. “There is no good reason to allow the Russians to have nearly unfettered access to American air space for intelligence collection,” Thornberry stated.

As part of their anti-treaty campaign, Thornberry and his allies on the House Armed Services Committee repeatedly tried to remove funding for the OC-135s, which have handled America's Open Skies missions since 1993.

The OC-135s, variants of the classic Boeing 707 airliner, carry four conventional wet-film cameras—three for low-altitude shots and one for high altitude—plus personnel to operate the image sensors.

But the 1960s-vintage planes are old and badly in need of upgrading—and, eventually, replacement. In 2008, George Sarris, a contract OC-135 mechanic, went to the media with evidence that the OC-135s increasingly were unsafe to fly.

Ten years later, according to Sarris, the planes are even less safe. “It is my opinion that the OC-135s are in worse condition today in comparison to 2008,” Sarris told the National Interest.

In 2018 the Air Force asked Congress for $220 million to begin buying two new planes to replace the OC-135s. But Thornberry and his allies removed that money from the House version of the 2018 defense appropriation bill.

The U.S. Senate restored some of the money, thus preserving Open Skies for another year. With the Russia-Ukraine crisis escalating, opponents of Russian aggression are lucky the treaty, and America's special treaty planes, survived.