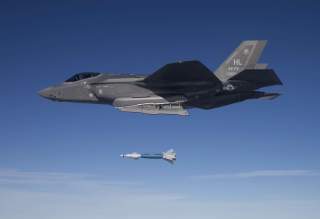 If dropping bombs on caves and tunnels were a guarantee of a weapon’s success, the F-35 would be awesome.

The strike marked the first time—or at least the first public admission—that the Air Force had used the Lightning II in combat. In September 2018, the Marine Corps became the first U.S. service to fly an F-35 combat mission, with a strike against Taliban positions in Afghanistan, followed by more than 100 F-35B sorties in Afghanistan, Iraq and Syria from aircraft based on the amphibious assault ship USS Essex. First blood for the F-35 probably belongs to the Israeli Air Force, which has sent its F-35Is on missions over Syria.

To be fair, the F-35 had to make its combat debut somewhere. And it makes sense to fly that debut on an uncomplicated mission against an undefended target. In fact, in today’s conflicts in places such as the Middle East, air operations typically involve high-tech American- or Russian-made aircraft dropping sophisticated bombs against low-tech Taliban or ISIS insurgents in caves or tunnels. Russia and the Syrian government have anti-aircraft missiles in Syria, but not actively aimed at U.S. aircraft.

In other words, there is not much opportunity for an American F-35 to encounter sophisticated enemy interceptors or surface-to-air missiles. That would require a bombing mission against an opponent like Russia, China, Iran or North Korea. In which case, the F-35’s combat prowess will be the least of America’s worries.

But the fact is that the F-35 is not designed or priced like a cheap counterinsurgency aircraft. Stealth anti-radar technology and advanced sensors aren’t needed for bombing rifle-armed militants hiding in caves. The F-35, like its predecessors from World War II and the Cold War, is meant for “big war” against major powers with major capabilities.

There are serious doubts about how the F-35 would fare against the latest Russian and Chinese weapons. There are problems with its 25-millimeter cannon, as well as its computers, sensors and cockpit displays. Maintenance and spare parts are issues. Testing and development appear to be rushed in an effort to prove that America’s most expensive weapons program isn’t a flop.

These problems will have to be mitigated because if they are not, the consequences of America’s premier combat aircraft ending as a failure are too horrible to contemplate. We can say at this point that the F-35 can take off, drop a few bombs on a target defenseless against air attack, and safely return to base.

Nonetheless, a few bombs dropped on a tunnel complex don’t offer many clues as to how the F-35 will perform in serious combat.