The U.S. Air Force Has a Spy Ship in the Persian Gulf 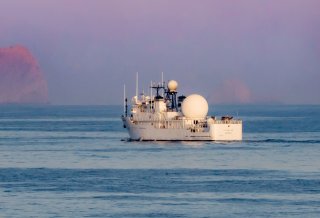 The U.S. Air Force quietly keeps a small, inconspicuous spy ship in the Persian Gulf, presumably in order to keep an eye on Iran’s missile launches.

But Invincible is just a hull—unremarkable, painted white and maintained by 18 civilian contractors. It’s what’s inside and atop the hull that really matters. A sophisticated, dual X- and S-band radar called Gray Star that belongs to the Air Force.

No one says much about Invincible or Gray Star. Military Sealift Command refers to the vessel as a “missile range instrumentation ship” whose job it is to “monitor missile launches and collect data.”

The Air Force’s Intelligence, Surveillance and Reconnaissance Agency, in its official history for 2012, lumped Gray Star in with its sea-based systems that collect “scientific and technical data of foreign military capabilities and systems.”

It’s apparent from the ship’s deployments that she spends most of her time keeping tabs on the regime in Tehran—specifically, Iran’s expanding arsenal of medium-range ballistic missiles.

The Air Force ISR Agency admitted that Invincible “typically” deploys to Central Command’s area, which includes the Persian Gulf and Indian Ocean. But there’s not a lot of actual evidence of the ship’s presence overseas. The military seems keen to downplay Invincible’s activities.

In May 2012, Invincible—which has no official homeport in the U.S.—passed through the Strait of Hormuz into the Persian Gulf in a convoy of U.S. Navy and British vessels. An official photo depicted the transit.

Another official photo from November 2012 showed sailors from the destroyer USS Jason Dunham riding in a small boat to visit Invincible somewhere in the Persian Gulf.

Military Sealift Command revealed in its official history for 2013 that Invincible sailed to the Mediterranean in May of that year.

But an online ship-tracking service showed that on July 27, 2013, Invincible was back in the Gulf, sailing 50 miles or so northeast of Bahrain, where the U.S. Fifth Fleet maintains its headquarters. After that date, the spy ship temporarily disappeared from online location databases.

We can reasonably assert that Invincible remained in the Persian Gulf even after she dropped off the ship-tracking sites. One user of the LinkedIn social media website claimed he was part of Invincible’s crew as recently as December 2013. He listed his location at that time as Bahrain.

And in the fall of 2014, Invincible’s crew shipped a one-ton package back to the U.S. via a commercial freighter. The crew gave its home address as Manama. The package arrived back in America in October that year.

Which was a strong indicator that the Air Force’s spy ship with her high-tech Gray Star radar was still on duty near Iran, apparently still watching for Tehran’s missile tests.

Invincible’s presence in the Persian Gulf became impossible to deny when, three years later, fast-attack boats belonging to the Iranian Revolutionary Guard Corps swarmed the spy ship as she was transiting the Strait of Hormuz.

The Iranian boat crews behaved in an “unsafe and unprofessional” way, a U.S. official stated. Invincible’s own crew had no choice but to change course in order to avoid a collision.

In November 2018, the Fifth Fleet tweeted a photo of Invincible in the fleet’s area of operations.

Two years later, Invincible was still in the Middle East. Ship-tracking websites as recently as March 2020 registered the spy vessel’s transponder at a port in Oman.