The U.S. Air Force Has Very Few B-1 Bombers Ready For Combat 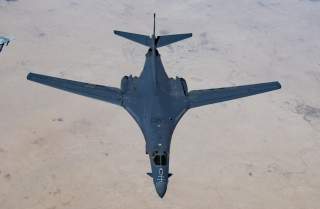 Only a few of the U.S. Air Force’s 62 B-1B Lancer heavy bombers are ready for combat. This at a time when the Air Force is trying to deploy more, not less, long-range firepower.

The Air Force bought 100 B-1Bs from Rockwell, now Boeing, back in the 1980s. In the 1990s the type flew nuclear-deterrence missions. The Air Force later removed the nuclear compatibility and upgraded the bombers for conventional missions while also retiring a third of the fleet.

The swing-wing, supersonic B-1Bs for years were the Air Force’s main platform for long-range close-air-support missions over Iraq and Afghanistan, where the bombers quickly burned through much of their structural lives and incurred a deep maintenance bill.

Mechanical problems earlier in 2019 forced the flying branch to ground the entire B-1 fleet for nearly a month. Now lawmakers on the House Armed Services seapower and projection forces subcommittee want the Air Force to come up with a plan.

“The situation has gotten so bad, according to the subcommittee, that the number of B-1 aircraft that are fully mission-capable is now only in the single digits,” Air Force Times reported. “What’s more, B-1 aircrew are being rerouted from flying the bomber to other aircraft, because there aren’t enough Lancers for their necessary training.”

“The committee is concerned B-1 readiness does not have the priority and resources to improve B-1 mission-capable rates,” lawmakers wrote in their version of the 2020 defense policy bill.

“The proposed authorization bill would require the Air Force to brief the House Armed Services Committee by March 1, 2020, on its plan to improve B-1 readiness,” Air Force Times reported.

That plan should address: how the Air Force expects to fix the bomber’s structural issues; its plans to continue analyzing and testing structural deficiency data; repair timelines, and strategies to mitigate these problems in the future.

The subcommittee also wants the Air Force to produce a training plan for pilots and maintainers, and a recovery timeline to meet the B-1′s future deployment requirements. The subcommittee’s requirements must still be approved by the full House and Senate.

The B-1s are falling apart at precisely the same time the Air Force is trying to grow the bomber fleet.

In September 2018 the Air Force announced it would ask Congress for the money to grow from 312 squadrons to 386 over the next decade. The additional 74 squadrons include five new bomber units.

In October 2015 the flying branch tapped Northrop Grumman to design and build at least 80 B-21 stealth bombers for around $500 million per bomber. Over the next three years, the number of B-21s the Air Force said it needed steadily grew.

By the time of the Air Force’s 2017 budget request, the requirement was for 100 B-21s. “We require a fleet size that will ensure sustained dominance well into this century and intend to procure a minimum of 100 B-21s,” the Air Force explained in a budget document.

The B-21s would replace B-2s and B-1s in the 2030s, the Air Force announced. The service said it would upgrade many of the B-52s in order to maintain an overall fleet of around 160 bombers.

Wilson's comments indicate the Air Force's changing thinking, if not the precise details of its bomber plan. To add five squadrons, the Air Force could buy 200 B-21s and retire all the older planes. Or it could acquire fewer B-21s while keeping the B-2s, B-1s and B-52s longer.

The flying branch has succeeded in maintaining the B-52 force despite crashes by periodically reactivating some of the roughly dozen of the eight-engine bombers that are in storage in Arizona.

The same might not be possible for the B-1 fleet. The B-52 is a simpler, tougher and more reliable aircraft than the B-1 is. Moreover, the flying branch already has cannibalized parts from many of the B-1s in storage, potentially rendering them unflyable.

Likewise, the Air Force has no options for expanding the B-2 fleet. Northrop Grumman built just 21 B-2s. One was destroyed in a crash. All 20 survivors are in front-line service.

With the B-1s fading fast and the Air Force hoping to grow the bomber fleet, the service is running out of options. It might be able to pull a few more B-52s out of storage. But realistically, it has no choice but to buy more B-21s.