U.S. Air Force Testing Its New Hypersonic Weapons on a B-52 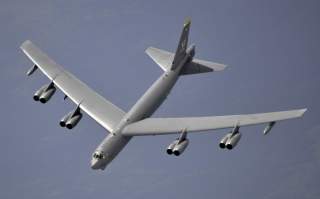 A new era in warfare?

The U.S. Air Force initiated test flights of the new hypersonic AGM-183A Air Launched Rapid Response Weapon, mounting them below the wings of a B-52 Stratofortress.

Known as the “Arrow,” the AGM-183A was slung aboard the B-52 in order to gather data on “drag and vibration impact” to the weapon, as well as how the B-52 would fare hauling the new missile.

Built by Lockheed Martin, the weapon moves faster than any aircraft in current use and is able to be deployed rapidly.

“This captive-carry flight is the most recent step in the U.S. Air Force’s rapid prototyping effort to mature the hypersonic weapon, AGM-183A, which successfully completed a preliminary design review in March,” Lockheed officials said in a release. “More ground and flight testing will follow over the next three years.”

According to Military.com, Boeing was also pleased with the tests, as it effectively keeps the B-52 relevant for the near future.

“This recent success put the [Air Force] well on its way to the live-launch testing of an extraordinary weapon soon,” said Scot Oathout, director of bomber programs at Boeing, in a statement. “The future B-52, upgraded with game-changing global strike capability, such as ARRW, and crucial modernizations like a new radar and new engines, is an essential part of the [Air Force’s] Bomber Vector vision through at least 2050.”

A new version of the AGM-183 is expected to roll out soon.