The U.S. Air Force Wants to Learn from Japan 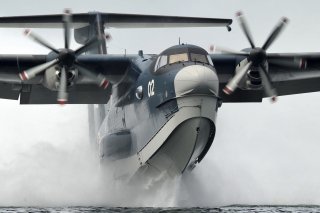 The Indo-Pacific region is growing increasingly important. As a result, one of the Air Force’s two-stars went to Japan to see how that country deals with the world’s largest ocean.

Though many miles separate island from island in the Pacific Ocean, the U.S. military is preparing to overcome this challenge. It’s a top priority for the U.S. Air Force Special Operations Command, so much so that the combatant command sent Maj. Gen. Eric Hill to Japan to learn how the Japanese Self-Defense Forces fly aircraft throughout the Indo-Pacific region without landing strips or aircraft carriers.

The Japanese have an old-school solution: use turbo-prop floatplanes that can land and take off from water, such as the ShinMaywa US-2 amphibious aircraft. The US-2 foregoes pontoons like some aquatic aircraft in favor of a hull-like fuselage that acts like a ship’s hull when in the water, though the plane can also land on a traditional landing strip thanks to its retractable landing gear.

“We’re an incredibly capable air force, and while we still need to be able to land and take-off from land-based airfields, the ability to turn the Pacific Ocean into a runway would increase our options to help secure our nation’s and allies’ security interests,” Hill said.

Still, it’s the kind of maneuver that the United States has little experience with. “Flying an airplane that can land on water isn’t a new concept, but few aviators have the experience of amphibious aviation,” Hill said. “Gaining lessons from our partners will help us learn what to anticipate as we begin to build our own tactics and techniques moving forward.”

The airplane’s pontoons would be removable and allow the aircraft to land on land and at sea. The United States’ flying branch also wants the system to be easily compatible with similar aircraft in U.S. Navy and Marine Corps inventories with only minor modifications.

Though the United States once operated several amphibious aircraft, the feature fell out of favor as the United States expanded its presence across the Pacific. However, considering the renewed focus on the Indo-Pacific region, aquatic airplanes are likely to come back with a vengeance.