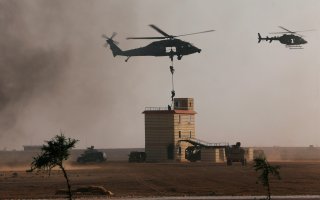 Earlier this month some 4,000 U.S. troops from the United States Marines Corps and United States Navy, took part in a biennial exercise with units of the United Arab Emirates at the Al-Hamra Military Base located 125 miles to the southwest of Abu Dhabi. According to reports from the Associated Press per Defense News, the exercise, which was dubbed Native Fury, was conducted to highlight the close ties between American forces and those of the UAE amidst growing tensions with Iran.

The exercise was attended by John Rakolta Jr., U.S. ambassador to the UAE, as well as several senior armed forces officers. A presentation was made on Native Fury's practical implementation, which included joint military activities between U.S. and UAE forces.

During the exercises, U.S. forces along with Emirati troops stormed an imaginary city specially built for such training. It features very real stand-alone houses, hotels and apartment complexes. It has all the makings of a small Middle Eastern town, complete with a gas station, airport control tower, oil refinery, central mosque and a fast-food restaurant.

The exercise, which involved ship-to-shore offloads of personnel, equipment and humanitarian resources, was designed to train Special Purpose Marine-Air-Ground Task Force Marines and U.S. Navy Sailors in maritime prepositioning operations. In addition, it was meant to further increase proficiency, expand levels of cooperation, enhance maritime capabilities and promote long-term regional stability and interoperability between the United Arab Emirates and the United States.

During the biennial exercises, the first images of the UAE Armed Forces' new Rabdan 8x8 infantry fighting vehicle (IFV) were released, according to reports from Jane's. The vehicle, which was seen crossing a canal, is based on Otokar's Arma 8x8 and equipped with the same turret the UAE Armed Forces use on its BMP-3 tracked IFVs.

The United States has maintained friendly relations with the UAE, a federation of seven sheikhdoms on the Arabian Peninsula that include the capital of Abu Dhabi as well as Dubai, since 1971 when it gained independence from the United Kingdom. The two countries have had formal diplomatic relations since 1972, and have been military partners in the region. This includes a United States Air Force presence at the Al Dhafra Air Base – and last fall a group of F-15E Strike Eagle fighter from the 494th Fighter Squadron arrived at the base to support ongoing operations.

The UAE regularly conducts similar exercises with its military partners and this has included the "Gulf" exercises with France, which began in 1996 and has been held every four years to strengthen the combat efficiency of the forces of both countries as well as to improve the planning and conducting of joint operations in the region. The next joint operation, "Gulf 2020" is scheduled to take place later this year.