The U.S. Army and Navy Are Going All in on Hypersonic Weapons 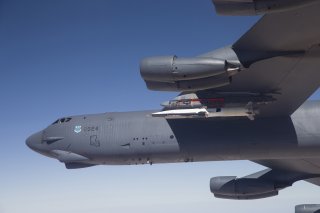 Last week, the Department of Defense (DoD) announced that it had successfully tested a common hypersonic glide body (C-HGB), in an experiment conducted from the Pacific Missile Range Facility at Kauai, Hawaii. The launch was jointly performed by the United States Army and United States Navy, while the Missile Defense Agency (MDA) concurrently monitored and gathered tracking data from the flight experiment.

Hypersonic weapons are capable of flying at speeds greater than five times the speed of sound (Mach 5) and yet are highly maneuverable and can operate at varying altitudes. This can enable the military to strike a wide range of high-value targets that are hundreds or even thousands of miles away in just a matter of minutes.

Last week's test was considered a major milestone in the DoD's goal of fielding hypersonic warfighting capabilities in the early- to mid-2020s.

''This test builds on the success we had with Flight Experiment 1 in October 2017, in which our C-HGB achieved sustained hypersonic glide at our target distances,'' said Vice Adm. Johnny R. Wolfe, director of the Navy's Strategic Systems Programs, which is the lead designer for the C-HGB, via a statement.

''In this test we put additional stresses on the system and it was able to handle them all, due to the phenomenal expertise of our top notch team of individuals from across government, industry and academia," Wolfe added. "Today we validated our design and are now ready to move to the next phase towards fielding a hypersonic strike capability.''

Delivering hypersonic weapons is now considered one of the DoD's highest technical research and engineering priorities.

This technology has even been compared to nuclear weapons in that these hypersonic weapons can act as deterrents, but are also potential "game changers" as these can be used to respond to a conflict from hundreds of miles away. Last month Acting Navy Secretary Thomas Modly issued a memo called the development of hypersonic technologies a "Sputnik" moment – comparing it to the 1960s-era Space Race.

"The possible applications of hypersonic technologies have already changed the nature of the battlespace, much as nuclear technology did in the past century," Modly wrote as reported by Military.com

Information gathered from last week's test flight, along with future experiments, will help inform the DoD's development of the hypersonic technology.

When fully fielded, the C-HGB will comprise the weapon's conventional warhead, guidance system, cabling and thermal protection shield. As a joint Army-Navy program, the services are working closely with industry on the C-HGB's development.

The U.S. Navy is taking the lead as the system's designer, while the U.S. Army will take up the lead for production. Each service will use the C-HGB, but will develop individual weapons systems and launchers that are tailored for specific roles required by each military branch.

The Pentagon has made the development of hypersonic weapons a priority and doubled its long-term investment to almost $5 billion in FY2020. This investment has come as both China and Russian have put forth hypersonic programs. China already has an anti-ship hypersonic missile, and Russia has reportedly tested several hypersonic weapons that could be launched from ships, submarines, ground sites or even from the air.