The U.S. Army Is Asking Retired Soldiers to Join the Fight Against Coronavirus 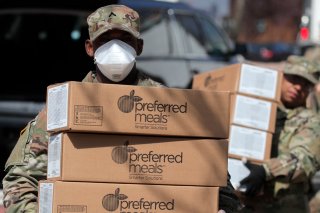 Last week President Donald Trump signed an executive order that allowed the U.S. military to recall members of the selected reserve as well as some former service members to active duty in response to the COVID-19 outbreak.

“This will allow us to mobilize medical disaster and emergency response personnel to help wage our battle against the virus by activating thousands of experienced service members including retirees,” the President told reporters.

The call came after thousands of Army retirees had already responded to a voluntary recall request to those in health care and related fields to help the service fight the spread of the coronavirus.

“We reached out to more than 800,000 retired Soldiers to gauge their willingness to assist with the COVID-19 pandemic response,” an Army spokesperson told Military.com. More than 14,000 retirees who represented various specialties had contacted the service for more information.

To help further address the ongoing pandemic, which continues to spread across the United States, the Army began calling up members of the Individual Ready Reserve on a voluntary basis. This signals the military’s need to bolster its medical capability to fight the coronavirus.

At present the Individual Ready Reserve has 224,841 members, and it includes trained soldiers who may be called upon, if needed, to replace soldiers in active duty and Army Reserve units. The IRR is comprised primarily of soldiers who need to fulfill their Military Service Obligation (MSO) under Section 651 of Title 10 USC, while soldiers who have completed the MSO can elect to remain in the IRR if eligible.

The ready reserve status requires no active participation or drilling, and for most of the service members in that status it is much the same as being out of the military.

“On March 29, Human Resources Command sent messages regarding the voluntary recall to nearly 10,000 members of the (Individual Ready Reserve) with specific medical skills,” Lt. Col. Emmanuel Ortiz told CNN in a statement. “Protecting our citizens from the coronavirus is a vital call to action. We need the help of many of our Individual Ready Reserve medical professionals. They possess valuable training, education, skills and talents necessary to win this fight.”

The U.S. Army has already played a major role in responding to COVID-19, and this has included its deployment along with operations at field hospitals in states such as New York and Washington, which have each been seen as epicenters of the ongoing outbreak.

The Army is now seeking former service members who served in specific mission specialties in medical fields such as critical care and emergency nursing. However, the Army has stated that it is not seeking any medical personnel who are employed at local community hospitals, as the Army doesn’t want to detract in any way from ongoing response efforts.

If the pandemic worsens it could require a major military mobilization, but an involuntary recall would only begin if there aren’t enough active-duty members, selected reserve and guard members along with other volunteers returning to duty. Military.com noted that the recall would follow:

1. Retirees and inactive reservists under 60 who have been off active duty for less than five years

2. Retirees and inactive reservists under 60 who have been off active duty for five years or more

3. Retirees and inactive reservists, including those retired for disability, who are over 60 years old

This would also be based on the mission needs. A medical officer, even one who has been out of the service for several years could be recalled before an aircraft mechanic who recently left the service. In addition, the law may exempt veterans with some disabilities or medical conditions.