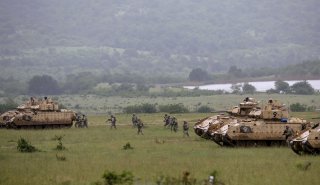 Seconds after a group of enemy fighters emerge from behind a ridge, U.S. Army soldiers instantly transmit location and targeting details to their unit using software programmable radio-generated high-bandwidth waveforms.

This could allow a drone, helicopter or nearby ground unit to counterattack with precision. Beyond this network where each radio is also a wireless router linking other nodes, what if this terrestrial connectivity could also send data to a command center connected to medium or low Earth orbit satellite terminals? In this instance, key combat details can not only be networked across a deployed force in a specific geographical area of operations, but commanders and decision-makers thousands of miles away might also see crucial information in real-time. This kind of technical capacity, long under development by Army networking engineers, can extend command and control across thousands of miles, giving decision-makers an ability to receive a fuller battlefield picture. Not only that, commanders can then offer input, direct resources or make crucial decisions based on new threat.

A speedy, integrated network has been the goal of the Army for several decades.

It is now possible.  The Army’s second iteration of its breakthrough “experiment of learning” Project Convergence exercise at Yuma Proving Grounds, Ariz., continued this year to demonstrate paradigm-changing breakthroughs in the realm of secure information sharing, decreases in latency, and a staggering acceleration in sensor-to-shooter time. During Project Convergence, developers had a solar-powered drone remain airborne to extend the aerial tier of the ad-hoc network.

“At Yuma, we had manned-unmanned teams on the ground and also ground unmanned vehicles and air unmanned vehicles able to leverage the communication relay drone,” Col. Eric Van Den Bosch, Chief of Staff for the Network Cross Functional Team at Army Futures Command told the National Interest in an interview. “This increased their range on the ground, connected them to one another, and extended their situational awareness back to higher headquarters.”

Using medium Earth orbit satellite connectivity, Army engineers and commanders sent combat data from a command post at Fort Lewis, Wash., to two locations at Yuma Proving Grounds, Arizona, Van Den Bosch explained. While this might not seem unusual as satellite communications have existed for some time, there are several key elements to the breakthrough. Speed and security were improved, and information assurance was increased. Perhaps most important was the ability to get information to the “tactical edge” of combat at what weapons developers call “the speed of relevance.”

“Our (communications) relay was done on the ranges in order to support air-to-ground as well as aerial connectivity,” Van Den Bosch said. “Soldiers got into a (Future Vertical Lift aircraft) platform and a UH-60 (helicopter) with surrogate capabilities. We could see their location within the helicopter, so the helicopter was talking to the other helicopter and we were still able to communicate and see the soldier on the ground.”

The concept not only brings situational awareness back to headquarters but informs real-time tactical decisions. The process has historically taken twenty or more minutes, but Project Convergence accomplished it in seconds. An artificial intelligence (AI) computer system called Firestorm makes this possible. The computer system was able to gather disparate pools of incoming sensor data, organize it to find key moments, perform analytics, and bounce new information off of a database to find an optimal countermeasure, attack mode, or weapon to respond to a target. This can happen in milliseconds, and the AI-capable system’s database can draw upon variables such as weather, geography, target specifics, and historical data. Past warfare scenarios, including successes and failures, can be cataloged within the database to compare with new information. Decisions, previous, and specific recommendations can then be made to commanders.

Network resiliency and survivability is a key element of this, as the networking mesh builds redundancy to ensure continued connectivity if one node is destroyed, disabled, or impaired. Otherwise disparate nodes are “aggregated,” Van Den Bosch said, “so there were more options and pathways. We want to provide a resilient network so that if I lose a connection to one, I still have the ability to leverage a different one.”