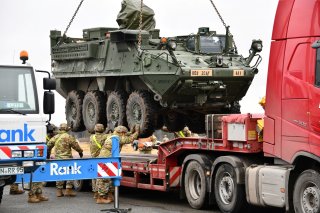 The Department of Defense is deploying a squadron of Stryker armored fighting vehicles to Romania as part of a series of maneuvers throughout Eastern Europe intended to deter Russia amid its ongoing military buildup on the Ukraine border.

A group of Strykers and about one thousand troops are en route from Germany to Romania to conduct operations and train with Romanian allies. About nine hundred American troops have already deployed to Poland.

“They will be establishing themselves … to be able to respond to multiple contingencies and to conduct whatever missions are called on to do,” said Department of Defense spokesman John Kirby. “One of them could very well be preparing for some sort of evacuation assistance on the Polish side of that border.”

Few specifics about the Stryker deployment were available. Kirby discussed the deployment in the context of the Pentagon’s overall force posture in Eastern Europe to reassure NATO allies in the region.

“This is a very small number of troops that are quote unquote, ‘deploying,’” Kirby said. “And quite a few of them are actually just redeploying inside Europe and that we have 80,000 other troops in Europe. So, the additions that we're making, while the Secretary deems them necessary to reassure our -- the Eastern Flank of NATO.

“They are but a small fraction of the total number of troops that we have in Europe and have been there again, as part of our NATO commitments for a long time.”

Strykers, which are wheeled vehicles, can carry infantry at high speeds. Stryker units could deploy to assist evacuees or establish security checkpoints. Some Strykers are also armed with a .50 caliber machine gun or a 30-millimeter cannon. These capabilities could help transport supplies or personnel in the event of a large-scale evacuation along the Ukrainian border.

While training and exercises with NATO allies are critical to preparation and deterrence, the land force maneuvers are also largely symbolic. Small numbers of infantry and armored Strykers are unlikely to engage or challenge an advancing Russian mechanized force.