The U.S. Army Is Gettling Lots of New Guns (Think Sniper Rifles and Much More) 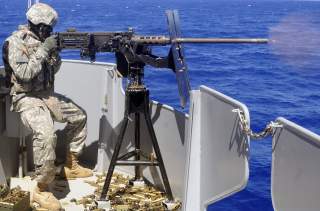 The U.S. Army is currently evaluating a new small arms systems that could give their warfighters a serious edge, including squad weapon and sniper rifle.

The Army is rolling along on multiple fronts in the small arms department, ranging from area weapons to those with a little more precision- to put it lightly.

Testing began earlier this year and has involved firing over 8,000 rounds from various positions and while wearing different equipment.

According to the National Interest, the Army claimed the new upgrades include “increased accuracy, plus other ergonomic features like reduced weight and operations with or without a suppressor.”

In Maryland, officials at the US Army Combat Development Command have been testing the new Next Generation Squad Weapon-Technology platforms, which were sent forward as prototypes by Textron Systems.

The new squad weapons (NSGW-T), were pushed from development to product in short order.

“Moving from contract award to delivery of a revolutionary, next-generation weapon in just 15 months not only demonstrates the maturity of our CT [Cased Telescoped] technology, but also the project execution excellence our team possesses to rapidly fill critical warfighter needs on schedule,” said Textron Systems Senior Vice President of Applied Technologies & Advanced Programs Wayne Prender. “Our CT weapons and ammunition offer the growth path to a true next-generation small arms weapon for U.S. warfighters, including increased lethality at longer ranges, while also delivering significant weight reductions to the warfighter.”

Military Embedded Systems reports that the cased telescoped ammunition, while proprietary in nature, allows for more ammunition to be carried without giving in to the weight issue posed by conventional ammo.