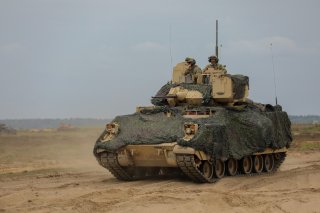 The Army is surging to build a prototype of its emerging Bradley replacement vehicle, the Optionally Manned Fighting Vehicle, a new platform that will transport soldiers into combat, possibly launch drones, and operate autonomously on the battlefield.

Developed as part of the Army’s Next-Generation Combat Vehicle program, the new infantry carrier has received design work from five different contractor teams working to provide the Army with an optimal solution.

“We have five companies under contract now in our current … phase, where we're working through digital design work,” Douglas Bush, assistant secretary of the Army for acquisition, logistics, and technology, told the National Interest in an interview.

As is often the case, the ultimate requirements for the vehicle are likely still a work in progress as the Army engages with industry partners to build prototypes, integrate emerging technologies, and begin testing and assessments.

“I’m really pleased with what I'm seeing, I think the Army is on the good path there, I think we're taking the right approach—in terms of the next stage, [which] will include up to three vendors actually building real prototypes—that we're going to test and fully figure out what they can and can't do before we lock the requirements and actually go to production. In the past, the Army has locked requirements kind of too early in some cases, and gotten ourselves in situations where we didn't have flexibility later, when … the technology worked out a little different. I think we're avoiding that trap this time,” Bush said.

Army program leaders explain that the development strategy aims to inspire industry innovators to think creatively about new methods to engineer improved combat performance. An Army statement said that following the concept design phase, the Army intends to have another full and open competition for the detailed design phase (Phase III), with the intent to award up to three contracts in the second quarter of the fiscal year 2023.

This initial digital design phase will lay down a technical and conceptual roadmap for an initial OMFV requirements document. While requirements will evolve and refine in the coming years, some early concepts include advanced levels of autonomy. That autonomy consists of an ability to operate drones, operate with lethality in close combat circumstances (in either a manned or robotic capacity), and achieve what Army developers call “positional advantage.”