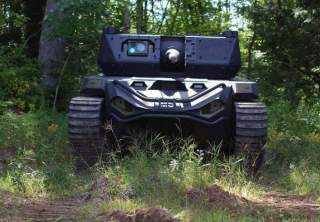 The U.S. Army has tapped contractors to begin building a possible fleet of robotic fighting vehicles.

The Army also wants a bigger, more powerful Robotic Combat Vehicle-Heavy, but the service doesn’t plan to begin testing the larger vehicle until 2023.

After testing the armed robots, the Army plans to make a decision about wider development of the vehicle for front-line use.

The RCV contracts came earlier than many observers expected. This reflects the Army’s rapid progress on the robotic-vehicle programs.

“There’s a lot of excitement in industry, in the Army, and we’ve seen industry ahead of our timeline a little bit,” Brig. Gen. Richard Ross Coffman, director of the Next Generation Combat Vehicle Cross Functional Team, told Breaking Defense reporter Sydney Freedberg, Jr. “We are adjusting our expectations.”

After reviewing the unmanned ground vehicle demonstrators that companies are developing for various Army requirements, Coffman told Freedberg he was impressed by the levels of autonomy and modularity.

“Overall, the robots are about two years more sophisticated than expected,” Freedberg wrote, citing Coffman. “Capabilities the service expected in 2023 are now potentially achievable in 2021.”

Between 2020 and 2023 the Army hopes to test all three classes of RCV. The RCV-Light should weigh around 10 tons and come armed with machine guns or rockets in the class of the Javelin anti-tank missile.

The RCV-Medium should weigh around 12 tons and carry a 30-millimeter cannon or similar weapons, essentially matching the armament of a manned M-2 infantry fighting vehicle.

The RCV-Heavy would be a robotic tank, albeit a lightweight one. Weighing around 20 tons, an RCV Heavy could pack a 120-millimeter main gun.

Several defense firms debuted their UGV designs at the Association of the U.S. Army trade show in Washington, D.C. in late October 2019. Textron revealed its own Ripsaw M5 UGV, a robotic light tank, in advance of the show. The Army clearly was impressed.

The Ripsaw could meet the Army’s RCV-Light and -Medium requirements, but the service has nudged Textron to focus on the latter. The tracked, turreted Ripsaw “is intended to perform various missions including convoy protection, perimeter defense, surveillance, rescue, border patrol, crowd control and explosive ordnance disposal,” Textron stated.

QinetiQ has been tinkering with its Titan UGV, also equipping it with weapons for the RCV-Light or RCV-Medium roles. The Army wants QinetiQ to focus on the RCV-Light requirement.

In September 2019, a Titan fired multiple Javelin anti-tank missiles at targets on the Army’s Redstone range in Alabama. The test underscored the RCV’s potential as a platform for precision direct fires, somewhat overlapping with the main role of the service’s M-1 tank.

But the Army doesn’t want a robotic version of the M-1, Freedberg explained. “Instead, it’s looking at robotic combat vehicles that could be much smaller, cheaper and more expendable than its manned vehicles — five, 10 or 20 tons, officials say -- allowing them to play very different tactical roles.”

The Army conducted some initial RCV testing as early as 2017. That year, an armed, robotic M-113 tracked armored vehicle provided covering fire for soldiers during a war game in Michigan.

In one of the next major tests of the Army’s RCV force, soldiers riding in a specially-modified M-2s will control a platoon of ground robots during an exercise in Colorado in 2020.

The Colorado war game will involve two of the special M-2s controlling a total of four robots, South reported.

Even the unmanned M-113s are surprisingly capable, Coffman told Freedberg. In Michigan, Coffman said he “witnessed four robots execute a maneuver, establish a screen line, call for [artillery] fire, and then attack, with direct fire, an opposing force -- all while the control vehicles were under defilade and undetectable by the enemy.”

Adding ground robots to infantry and armor units “reduces risk,” said U.S. Army major Cory Wallace, who oversees some RCV development for the service. “It does so by expanding the geometry of the battlefield so that before the threat makes contact with the first human element, it has to make contact with the robots.”