The U.S. Army Loved the M1 Garand Rifle, But It Wasn't the Only Option 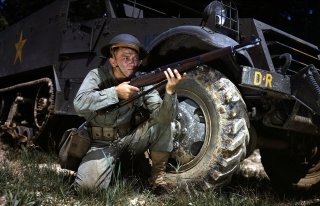 The M1 Garand was easily the best main battle rifle of the Second World War, and it was praised by the GIs who carried it, but also by General Dwight D. Eisenhower who had described it as the weapon that won the war. The highest praise came from Gen. George S. Patton, who called the M-1 Garand rifle "the greatest battle implement ever devised."

As The National Interest previously reported, the M1 Garand was, "Simple, sturdy, and well designed for its time, the Garand gave U.S. Army soldiers and Marines far greater firepower than their enemies—and allies too, for that matter."

However, it is largely forgotten that John C. Garand – known also as Jean Cantius Garand due to his French-Canadian birth – wasn't the only firearms designer working on a semi-automatic rifle for the U.S. military. Moreover, Garand's early efforts weren't entirely promising, and had he given up, the U.S. soldiers and marines might have had to carry a different weapon.

Garand faced competition from no less than Brigadier General John T. Thompson, who created the infamous Thompson submachine gun – one of the most successful automatic weapons of the 20th century. Thompson's "Annihilator" arrived too late for the First World War and instead was actually marketed to the civilians, while its first government contract was actually with the Post Office!

However, Thompson continued to work on designs and these included the Thompson Autorifle Model 1929, which was developed for the U.S. military's semi-automatic rifle trials. The weapon was chambered in .30-06 and it utilized a delayed blowback operation rather than the more complex gas-operated action, but it also required lubricated ammunition. It ejected spent casings in such a violent manner that it was reportedly hazardous to those around the shooter. Neither would have been ideal for combat. However, a modified version of the Thompson submachine gun – the M1A1 version – was carried by officers, NCOs, and scouts throughout World War II.

The most serious competition for the M1 Garand came from weapon designer Melvin Johnson with his M1941 Johnson Rifle, a short-recoil operated weapon that had some notable benefits. First, it had a greater magazine capacity than the M1 Garand, and soldiers could recharge the magazine individually or with five-round stripper clips even with the bolt closed on a chambered round.

However, the short recoil system often resulted in a vertical shot dispersion and the rifle was prone to jamming when used with a bayonet. The biggest problem was that the Johnson was just not as rugged as the Garand. Yet, despite its shortcomings, during World War II some 70,000 M1941 Johnson Rifles were produced and it was used by the United States Marines Corps in the early stages of the Pacific campaign. Even in the jungle conditions, the weapon performed reasonably.

Melvin Johnson is also notable for designing two guns that weren't adopted by the U.S. military, and interestingly both are often praised by many firearms enthusiasts.

In addition to his semi-automatic rifle, Johnson developed a recoil-operated light machine gun – and notably, it shared many of the same parts with his M1941 rifle design. This light machine gun, which was fed from a left side-mounted 20 round magazine, had an adjustable rate of fire of 200 to 600 rounds per minute.

It operated from an open bolt while in automatic mode and closed bolt in semi-auto mode, a feature that was also seen in the German FG-42 paratrooper rifle, which was developed during the Second World War.

The downside to the Johnson M1941 Light Machine Gun was that it was heavy to carry when loaded and also unbalanced. While it was never adopted by the U.S. military some 9,500 were produced and used by Army Special Forces and USMC during World War II. Notably, a Johnson LMG was carried by Ernesto "Che" Guevara during the Cuban Revolution. While not the same high praise that the Garand had, impressive none-the-less!