The U.S. Army Wants Pulsed Lasers to Slice Missiles in Half 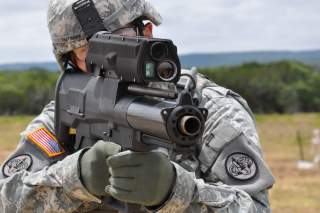 The U.S. Army wants a deadlier laser weapon that won’t just burn a target, but rather will slice it up.

Instead of low-power continuous wave lasers that emit a steady stream of energy, the Army wants pulsed lasers that shoot intermittent but intense bursts that can quickly destroy a target. Pulsed lasers are already used commercially for precision cutting and etching.

How big a difference will this make? Consider this: the Army plans to mount 50-kilowatt continuous wave laser weapons on Stryker armored vehicles by 2023. A kilowatt is 1,000 watts. The Army now wants to develop tactical ultrashort pulsed lasers with minimum peak power of one terawatt and a maximum of five terawatts. A terawatt is a trillion watts.

A key determinant in the effectiveness of laser weapons is how long the beam has to remain focused on the target. For the United States and other nations that are developing laser weapons to destroy fast-moving or hard-to-hit objects such as ballistic missiles or drones, the ability to deliver a quick, intense burst of energy on a moving target is vital. While CW lasers can be useful, “due to their fundamental different natures, lasers with pulse widths in the range of femtoseconds [one quadrillionth of a second] provide unique tactical capabilities due to their rapid discharge of enormous power,” the Army said.

A big advantage of pulsed lasers is that they can destroy or disable a target in multiple ways. “While most CW lasers simply melt targets, USPL systems are able to neutralize threats via three distinct mechanisms: ablation of material from the target, the blinding of sensors through broadband supercontinuum generation in the air, and the generation of a localized electronic interference used to overload a threat’s internal electronics,” the Army explains.

Pulsed lasers can instantly generate an immense powerful burst of energy, according to Dennis Killinger, a professor emeritus of physics at the University of South Florida. “The basic difference between CW and femtosecond laser pulses is that the instantaneous peak power within the 200 femtosecond pulse is about one terawatt, so that the instantaneous power is about a thousand billion times greater than the CW laser,” Killinger told The National Interest. “At this high peak power, the target material will be cut instead of burning, and the other advantages will be a filament guided beam and some plasma generation that could possibly affect electronics.”

Of course, there’s a catch. Continuous wave laser technology has been around long enough that the military has been able to ruggedize the system for use in the field. Over the last twenty years, pulsed lasers “have gone from requiring dedicated buildings at national laboratories to sitting on academic optics tables across the country,” the Army notes. But pulsed lasers “while promising, still have many hurdles to overcome in SWaP [size, weight and power], relevant operating environments, and consistent mass manufacturing.”