The U.S. Army Wants to Replace Forward Observers With Robots 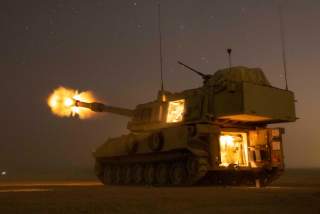 During World War II, the Canadian army fighting in Europe had a joke: the army consisted of a forward observer with a radio to call in the artillery, while everyone else was there just to be his bodyguard.

That’s more than an exaggeration, but it does illuminate a point: arguably the most important single soldier on the battlefield is the forward observer. Armed with a radio and a laser designator, the amount of artillery and aerial firepower he can call down is truly staggering.

But can this job be performed by machines? The U.S. Army hopes to find out.

A new research project aims to use automated sensors to replace forward observers. “By eliminating a human forward observer from the loop, this sensor architecture could allow munitions to be fired more rapidly, and the accuracy of the munitions assessed faster,” asserts the Army research solicitation. It would also allow for the placement of sensors in locations where commanders are unwilling to risk human life, and it could free soldiers to perform tasks only capable of being performed by humans.”

The problem is that it takes time for a forward observer – also known as a Joint Fire Support Specialist – to call conventional artillery shells, watch the spotting rounds miss the target, and then call in the corrections to the gunners. Laser- and GPS-guided smart rounds have a higher first-round hit probability, but they are scarce and expensive. Not to mention that because they are so lethal, forward observers are always prime targets for the enemy.

So, the Army wants a suite of sensors that can call in, quickly and accurately, indirect fire. “To replace the forward observer with a smart reconnaissance mechanism, networked to the fire control system, the suite of sensors should be capable of geolocating a target in a GPS-degraded environment,” the Army says. The system should also be capable of identifying targets such as tanks and bunkers, communicating with the gunners to adjust artillery salvoes, and confirming the destruction of the target.

The Army seems particularly concerned about creating a capability to accurately call in artillery even when GPS is jammed or disrupted. The new technology should use a “gyroscope, compass, gravimetric sensors, accelerometers, and other methods of assured precision, navigation and timing.”

Other potential features could include integrating an entire network of sensors to ensure redundancy in case a single sensor is knocked out. Also desired is a capability “to provide target guidance while munitions are in flight, by means, such as but not limited to, laser guidance.”

Interestingly, Russia already has had the same idea. In 2018, Russia media reported that the Russian Air Force was planning to develop robot forward air controllers to call in airstrikes. The robot’s AI would be capable of identifying targets and then illuminating them with a laser designator for smart bombs to home in on. The idea came out of bitter experience: in Afghanistan, Russian controllers had a bounty placed on their heads by the mujahideen, while in a 2016 incident in Syria, a Russian controller surrounded by ISIS killed himself by calling in an airstrike on his own position rather than suffer the fate of an ISIS prisoner.

Charlie Heidal, a former Air Force Tactical Air Control Party specialist, told the National Interest that the Russian robot air controller would be “a waste of effort.” The controller “is an expert in the employment of airpower and needs to be there at the table when the ground commander is building his plan, be there when the fires officer is building out the fires plan, and needs to be there during the execution of the mission to work past the fog of war.” He also doubted whether a robot could keep with ground troops clambering over rough terrain.

While the U.S. Army seems to be interested in sensor networks rather than some kind of robotic vehicle, the same questions will doubtless arise: Can a machine be trusted to replace a human for accurately summoning a salvo of howitzer shells?