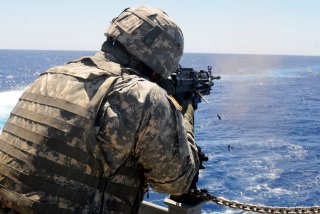 No one said that determining the weapon that future U.S. warfighters will carry into action would be easy. The U.S. Army is now requesting $111 million to continue prototyping the Next Generation Squad Weapons (NGSW) through the fiscal year in the recent budget request.

Earlier this year the Army selected three finalists to replace its legacy M4 carbine and M249 squad automatic weapons. The companies included Sig Sauer, General Dynamics Ordnance and Tactical Systems and Textron Systems. Each of the weapons has starkly different designs, but notably, each will be chambered for the new 6.8mm round, which was developed to be more lethal than the currently used 5.56mm NATO ammunition.

Army Times has reported that all three of the contractors are expected to deliver 38 prototype rifles and 28 prototype automatic rifles along with 660,000 rounds of ammunition for testing and soldier evaluations next year. The Army has announced that it would pick the winner and announce the production award by the end of the year; while the service would also develop an advanced fire control system for the new 6.8mm rifle and automatic rifle and this would go far beyond the optics currently used by soldiers on their light carbines and rifles.

Over the next five years, the Army plans to add more than 120,000 new light machine guns and rifles to the arsenal to replace the legacy M4 and M249. This would include 4,000 next fiscal year; double that number for 2023 and 2024 until by 2025 a total of 121,773 new weapons have been acquired. Army Times noted that the price tag for the first 4,000 units was estimated to be nearly $36 million according to the budget documents.

Only active-duty personnel are likely to be issued these weapons, and under the current procurement numbers only around one-quarter of the 485,000 active-duty soldiers will likely get a chance to carry the weapon in the coming years.

Army National Guard and Army Reserve soldiers will not likely receive the new systems until 2023 and even then fewer could be headed to them. Army Times reported the Guard is scheduled to procure 25,541 through fiscal year 2025. The Reserve is slated for 687 units in the same period.

The three prototypes are very different.

The Sig Sauer design is actually two versions in one, and both are based on its MCX firearms line. The advantage here is that it is similar enough to the legacy systems that soldiers shouldn't need additional training. The Textron prototype isn't radically different in appearance, but it features cased telescope ammunition that reduces the weight by using a plastic polymer to completely surround the projectile. The General Dynamics prototype features a "bullpup" configuration that places the magazine behind the pistol group – which reduces the length of the weapon but could require some additional training for soldiers used to the legacy systems.

No matter which of the designs is ultimately picked, it will mean the eventual end of the line by the mid-2020s for both the M249 and M4 Carbine.