The U.S. Army's M-9 Bazooka Blew Things Up Real Good (As In the User) 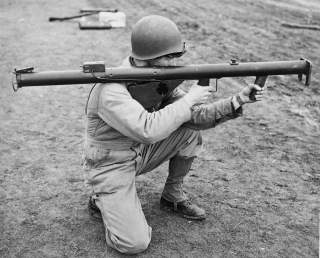 In 1945, Wilbur “Bill” Brunger was an engineer with the U.S. Army, and it was his job to break things. Namely, three underpasses on the Autobahn near Dortmund, Germany.

He had to break the underpasses, so the rubble would block the road from any attacking enemy vehicles. But as Brunger and a squad of soldiers attempted to take control of the underpasses, they spotted German armored half-tracks coming their way.

Fortunately, he had the right tool for the job at hand—an M-9 Recoilless Rocket Launcher—better known as a “bazooka.” Brunger fired a round at one of the half-tracks.

“It must have had ammunition because it blew, I’d say, a hundred feet in the air,” Brunger said in an 2004 oral history prepared by the Douglas County History Research Center in Colorado. “But it blew up. I was glad we weren’t any closer than we were.”

The bazooka was a straightforward weapon. During World War II, it was simple enough for rifle squads to use, and its high-explosive rounds were powerful enough to destroy bunkers, light tanks and pillboxes.

True, Gen. George Patton praised the M-1 Garand rifle as the greatest battle implement ever made. But Dwight Eisenhower ranked the simple bazooka with the atomic bomb, the jeep and the C-47 cargo plane as one of the four “tools of victory” that allowed the Allies to prevail over Nazi Germany and Imperial Japan.

“The bazooka is one of those weapons that has become iconic in spite of its limitations and problems,” Alan Archambault, former supervisory curator for the U.S. Army Center of Military History, told War Is Boring. “Even today, most people recognize the name and the weapon.”

Rockets on the battlefield are nothing new. History is full of examples of armies harnessing explosive force.

The 13th-century Chinese fired rockets at their enemies. The Star-Spangled Banner mentions the “the rockets’ red glare, the bombs bursting in air,” More specifically, the anthem refers to British Congreve rocketsfired at Fort McHenry during the War of 1812 in an effort to burn the fort to the ground.

American space pioneer Robert Goddard, inventor of the liquid-fuel rocket, even developed a prototype recoilless rocket launcher that he demonstrated to the U.S. Army in November 1918. But World War I ground to a halt just a few days later, and the U.S. military lost interest in rocket-powered infantry weapons.

Things changed fast when America went to war again in 1941. The only anti-tank weapons in its arsenal were the guns on its tanks and specific kinds of anti-tank artillery. That was a problem, considering the U.S. Army faced an enemy in North Africa—and later in Europe—that relied heavily on Panzer divisions.

U.S. Army Ordnance innovators Capt. Leslie Skinner and Lt. Edward Uhl experimented with shaped-charge grenades that packed an armor-piercing punch, but these were too heavy for soldiers to throw.

One day, Uhl apparently spied a steel tube on a scrap pile, and decided that a smooth-bore launch tube was the perfect companion to the grenade. He added a rocket to the grenade, and the result was a simple—if effective—anti-tank weapon.

But nobody called it that—and the contraption looked more like one of comedian Bob Burns’ novelty instruments. Burns was a popular entertainer during the era famous for blowing a tubular noisemaker called a “bazooka.” Dutch slang for “loudmouth,” the name for the joke instrument became the name of the weapon.

Optimally, the bazooka needed two people to fire it properly—a gunner who aimed and fired the rocket-propelled rounds, and a loader who carried the rounds in a cloth bandolier. The loader’s job was to load the launch tube from the back end, and toggle the safety switch.

An electric charge from a dry-cell battery ignited the powder charge in the rocket, the round streaked out of its tube—and flew on toward its target.

In the Pacific, heat and humidity plagued the standard bazooka’s electrical system. Soldiers and Marines who pulled the weapon’s trigger often experienced short circuits and misfires.

The bazooka produced significant “back blast”—discharge from the firing rocket that streamed out of the rear-end of the tube—that could crisp the operator or anyone standing directly behind the weapon.

The rocket-propelled round also left an obvious smoke trail that could give away the location of the shooter.

Under ideal conditions, the bazooka could hit targets up to 300 yard away. But realistically, close shots under 30 yards were far more common. This lead to a high mortality rate among gunners who often moved towardtheir targets to get the best shot.

However, improvements to the weapon produced the far-more reliable M-9. It had a lighter warhead and could penetrate five-inch armor—allowing it to destroy heavier armored vehicles than the M-1.

In 1944, one enterprising pilot of an L-4 observation plane even strapped three bazookas onto his aircraft during the Battle of Arracourt in France. Lt. Col. Charles Carpenter knocked out six German tanks with his improvised ground-attack plane and earned the nickname “Bazooka Charlie.”

Although intended as an anti-tank weapon, the bazooka could fire white phosphorous and incendiary warheads for anti-personnel and anti-material use. As the war progressed, bazooka users discovered the weapon worked best against emplacements and fortifications, particularly after the Germans began to weld thicker armor onto their tanks.

But overall, the weapon was so effective the bazooka received the sincerest form of flattery. The Nazis copied captured bazookas, and created the Panzerschreck anti-tank rocket launcher using the American weapon’s basic design.

Although it went through different variants, the bazooka remained in use through the early stages of the Vietnam War. That’s when the M-72 light anti-weapon—or LAW—eclipsed the bazooka and became the American soldier’s rocket weapon of choice.

However, the bazooka has one remaining cultural influence in American history. According to some sources, Bazooka bubble gum—first introduced to the gum-chewing public in 1947—owes its ordnance-inspired name to the World War II weapon that made a big bang.

This article by Paul Richard Huard originally appeared at War is Boring in 2015.