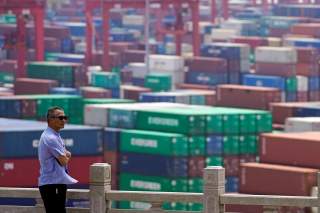 The U.S. has placed tariffs on more than US$250 billion worth of Chinese goods and has threatened tariffs on another $300 billion.

China has retaliated, placing tariffs of their own on billions of dollars worth of U.S. goods, including alcohol, fruit and pork.

Experts call it a trade war.

These five stories from The Conversation archives will help readers better understand what that a trade war is and what might happen next.

Amitrajeet A. Batabyal, an economist at the Rochester Institute of Technology, defines a tariff as “a tax levied on an imported good.”

In this case, Batabyal writes, the U.S. placing tariffs on China will make Chinese goods more expensive in the U.S.

But tariffs “are not implemented in a vacuum,” he writes, meaning that aggressive steps by the U.S. will likely be matched by China.

The inside of an iPhone gives some insight into the futility of this escalating spat.

Trump said in June that he planned to put 25% tariffs on $300 billion in imports from China, including iPhones, but many of the parts that make up an iPhone are made in Japan, South Korea, Taiwan and even the U.S.

In short, as the scholars write, “China gets a lot of low-paid jobs, while the profits flow to other countries.”

In this war, China has come up with an unexpected weapon: soybeans.

China, formerly the biggest buyer of soybeans in the world, “has reportedly stopped purchasing any American soybeans” according to Ian Sheldon, the agricultural marketing, trade and policy chair at The Ohio State University.

This is “in retaliation for the Trump administration raising tariffs on US$250 billion of Chinese goods,” he writes.

As Sheldon puts it, “This is very bad news for U.S. farmers.”

In part because of the trade war, Rodney Ramcharan, professor of finance and business economics at the University of Southern California, notes that the U.S. economy is slowing.

This has led the federal reserve to lower short-term interest rates for the first time in over a decade.

Ramcharan writes, “Given that it’s forced to do so by Trump’s own policies, the central bank is essentially signaling it’s now the administration’s insurer of last resort.”

Since the state of the economy traditionally plays a large role in U.S. elections, Ramcharan writes that the Fed’s willingness to lower short-term interest rates could help sway the 2020 presidential election in Trump’s favor.

The next question is: Is there an end in sight? Charles Hankla, a political scientist from Georgia State University, says no.

Instead, he writes that a trade war can only be won if “the country has more bargaining leverage than its opponent – in other words when it can impose more pain on its adversary than it experiences itself.”

Neither the U.S. nor China has that leverage, he says.

Hankla continues, “Since neither side is clearly winning or losing, we have probably not seen the end of this conflict.”

Editor’s note: This article is a roundup of stories from The Conversation’s archive.

This story first appeared in The Conversation on August 6.