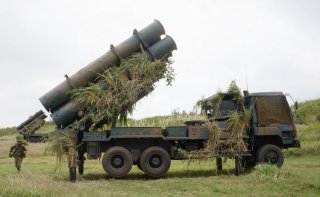 America’s cities and bases along the nation’s coasts face serious vulnerabilities to attack from enemy cruise missiles. They can be fired from submarines, warships and even container ships in international waters.

American missile-defense plans focus heavily on ballistic-missile threats, not cruise missiles[MW1]. (Ballistic missiles are launched at long-range targets and send their warheads out of the atmosphere and then Earthwards, while cruise missiles essentially are like small aircraft that carry their warheads while skimming close to the surface.)  However, scant mention exists of defending American coastal cities from surprise attacks from Russia, China, or even Iranian cruise missiles. Spy satellites can monitor movements of conventional surface warships and anti-submarine units can monitor submarines; however, both China and Russia have developed ways of camouflaging cruise missile launchers as shipping containers.

The U.S. military views development in cruise-missile technology by these countries with concern.

“Therefore, it is our responsibility to figure out how to counter that,” Air Force Gen. John Hyten, vice chairman of the Joint Chiefs of Staff, said Tuesday during a briefing sponsored by the Center for Strategic and International Studies in Washington.

Hyten criticized what he sees as the lack of a comprehensive strategic approach to missile defense by the Pentagon and called for a comprehensive across-the-board review.

Russia showcased its “Club K” container-borne missile system that can fire anti-ship and ground-attack missiles. The “Club K” can launch[MW2]  nuclear warheads against major U.S. cities from as far away from shore as twelve hundred miles.

This makes detecting and monitoring them before they could get within range of the U.S. coastline from space challenging. They would look like ordinary cargo vessels to satellites and maritime-patrol aircraft.

China copied the “Club-K” and Its YJ-18C cruise missile would be easier to deploy against U.S. coastal targets in a conflict due to its large shipping fleet. Some analysts worry about the threat such missiles pose to U.S. naval facilities along the coasts.

Beijing  has signaled its willingness to use civilian ships as a part of its “naval militia,” which enhances China’s “strategic projection and maritime support capabilities”

The 2019 Houthi cruise missile strike against a Saudi oil facility, using Iranian-made missiles, brought home the vulnerability to cruise missiles because they can hit without warning. Unlike ballistic missiles that would be spotted by Space Force-controlled early-warning satellites, cruise missiles can be fired from near ground level and evade detection.

“You can’t defend against something that you can’t see,” Hyten said about the cruise-missile threat in 2019.

The Space Development Agency (SDA) awarded SpaceX a $149 million contract and a $193 million contract to L3 Harris Technologies in October to develop a network of satellites to track ballistic and hypersonic missile threats. SDA wants eight SpaceX satellites in orbit by the end of 2022.

U.S. military planners should consider deploying AEGIS-type radars on platforms far from shore to serve as early-warning posts at needed intervals to protect American cities from nuclear-tipped or conventional cruise missiles. If combined with space- and land-based surveillance aircraft, such as the Poseidon, it could provide early warnings.

The Congressional Budget Office put the cost of a comprehensive cruise-missile defense at between $75 billion and $465 billion over the next twenty years in a recent report.

The U.S. cannot protect every target from cruise-missile attack; consequently, it needs to prioritize defending the most sensitive population centers and potential targets. The military should put emphasis on further developing airborne and ground-based lasers and microwave weapons that could defeat such cruise missiles, Hyten said.

The Army’s THOR microwave weapons system currently under development can neutralize swarms of drones or cruise missiles at the same time with rapid results.

The Pentagon must prioritize countering the threats to the American homeland from enemy cruise missiles launched from container ships or other enemy naval vessels.