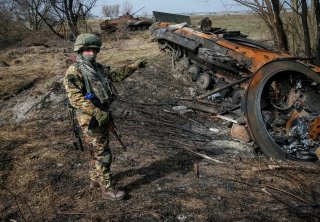 Despite Russia’s claims that it would withdraw its forces from the area around Kyiv, the reality on the ground appears to be different.

A senior Department of Defense official said on Thursday that only about 20 percent of Russian forces had pulled back.

“We continue to observe some Russian forces begin to reposition away from Kyiv, particularly from the north and northwest of Kyiv,” the official said. “I don't have an update on quantity. We haven't observed that much of a difference over the last 24 hours, so I'd still roughly leave it at about 20 percent or so. So it hasn't been wholesale movement, at least not at this point.”

While limited amounts of Russian troops continue to reposition, fighting in the area continues. Ukrainians have been able to launch limited counterattacks, but significant Russian forces remain near Kyiv.

“Despite the rhetoric of de-escalations, we're still observing artillery fire and airstrikes in and around Kyiv,” the unnamed defense official said. “They're still fighting to the north of Kyiv. As these forces begin to repositioning, the Ukrainians are moving against them.”

Some Russian forces may have withdrawn to Belarus or be preparing to redeploy to other regions of Ukraine to continue fighting. Meanwhile, Kyiv remains a target for Russian aircraft and artillery.

“The talk of de-escalation, and ‘We're pulling back because we want to give some oxygen to the talks,’ that's very nice rhetoric,” the defense official said. “But it doesn't mean that Kyiv is any under any less threat from the air. It continues to get pounded. So we think that part of these sorties are designed to continue the pressure on Ukraine from the air, even as they depressurize, you know, the ground presence around Kyiv. They're still putting pressure on the Ukrainians from the air.”

The Department of Defense has remained skeptical of Russia’s possible withdrawal from around the Ukrainian capital throughout the week.