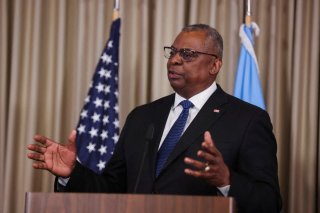 “I do perceive the Army leadership as woke, and probably the lower enlisted (they have been indoctrinated in school)," one service member told the outlet. "Equity diversity is another way to divide and control the masses. It does nothing for the warfighter.”

“I 100 percent believe the military is woke. I see daily minorities, overweight people and women not adhering to military standards," a service member said to Fox News. "Nobody corrects them due to the fear of being fired and labeled a racist or a sexist.”

“Troops themselves are largely treated as expendable and they don't even pretend otherwise,” another service member told Fox. “Spending 15+ years in the military during wartime with multiple deployments risking their lives only to be tossed out like garbage. Losing the retirement they have worked years to earn because they didn't want to take an experimental vaccine for an illness that was mild for fit and healthy people.”

Those comments matched complaints from conservative pundits and even some elected officials in the last couple of years. Maj. Gen. Patrick Donahoe had drawn fire recently for attempting to rebut such assertions from Fox News host Tucker Carlson.

But last week, in an interview with Defense One, the new commanding general of U.S. Army Recruiting Command said that “woke-ism” is not the reason for recent recruiting shortfalls.

Maj. Gen. Johnny Davis, per Defense One, “has identified many factors keeping young Americans from joining the service, including basic knowledge about life in the military, but ‘woke-ism’ is not among them.”

“A lot of our young superstars who will lead our nation just don’t know about the Army,” Maj. Gen. Davis said in the interview. “They’re asking ‘Can I have a pet? Can I drive a car?’ I say, ‘Of course, you can.’”

Davis added that he has not seen data showing whether “new policies on racism, extremism, and gender are affecting the Army’s recruiting or retention numbers.”

In the summer of 2021, both Defense Secretary Lloyd Austin and Chairman of the Joint Chiefs of Staff Mark Milley were asked about that issue in Congressional testimony, and both denied it.