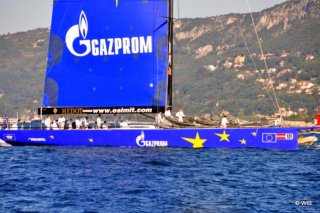 Despite heated discussions surrounding the Nord Stream 2 pipeline bypassing Central and Eastern Europe, the project by Russia’s state energy giant Gazprom does not pose a major security threat to the region. The recent deal concluded by the U.S. and German governments enables the final stages of work on the pipeline to be completed while mitigating political risks associated with the project.

The expansion of the 750-mile Nord Stream 1 pipeline under the Baltic Sea has caused much controversy in Western political circles, resulting in the United States sanctioning companies involved in the project and leading to subsequent construction delays. The Trump administration feared the project could tighten Russia’s political and economic grip on Europe, but President Joe Biden, seeking to mend ties with Berlin, chose to waive sanctions designed to block Nord Stream 2. The $11 billion megaproject now nears its completion and is due to be operational in the coming months, pending EU regulatory clearances.

In a joint statement last month, the United States and Germany stressed their determination to resist any attempts by Russia to use the pipeline as a political weapon and vowed to push for the extension of Ukraine’s gas transit agreement with Russia, set to expire in 2024, for another decade. They also pledged at least $1 billion for cleaner and greener energy for Ukraine, as well as financial support for energy infrastructure in Central and Eastern Europe through the Three Seas Initiative.

Ukraine and Poland protested the U.S.-Germany pact, arguing that the decision has “created a political, military, and energy threat” while “increasing Russia's potential to destabilize the security situation in Europe.” However, the assurances made by U.S. and German officials are more than enough to prevent Russia’s weaponization of the pipeline. German chancellor Angela Merkel said that if the Kremlin uses fossil fuels for geopolitical purposes, “Germany will take action at the national level and press for effective measures at the European level, including sanctions.”

Nord Stream 2 is unlikely to impact European demand for Russian gas, only the routes it takes to reach customers. The European energy market is indispensable to the Russian government, which relies increasingly on commodities exports to replenish its budget. Both the EU, the largest purchaser of Gazprom’s gas, and Russia, which supplies roughly one-third of Europe’s gas, have a stake in reliable and efficient pipeline transport.

Furthermore, Europe’s energy landscape experienced an astounding transformation in recent years, undermining Russia’s ability to exert political pressure on the continent. European countries have undertaken significant efforts to regulate and diversify gas supplies. They have implemented antitrust regulations, investigated Gazprom’s monopoly practices, imported liquified natural gas from the United States and Norway, built cross-border interconnectors, and adopted measures to accelerate decarbonization. The EU has also created a robust emergency response plan to possible disruptions of the Russian gas supply. Today, notwithstanding the occasional bribery of German and Austrian politicians, Gazprom has lost the political foothold it once had in Europe.

Nord Stream 2 could eventually result in substantial financial losses for Ukraine, but Western investment is likely to cover the country’s temporary budget shortfalls and lessen its reliance on transit revenues. By doubling the capacity of the Nord Stream system, Gazprom will be able to gradually reduce gas flows through the Brotherhood and Soyuz pipelines to save on transit fees, giving Moscow more leverage in commercial negotiations with Kyiv. Nonetheless, shifting away from transporting Russian gas and fostering economic modernization will ultimately make Ukraine more resilient in the context of Europe’s energy transition. Hence, the U.S.-Germany compromise eliminates the need to worry about the political ramifications of Nord Stream 2.

Arik Burakovsky is Assistant Director of the Russia and Eurasia Program at The Fletcher School of Law and Diplomacy at Tufts University. His research interests include the political role of the international media, public and elite opinion, soft power, public diplomacy, and U.S.-Russia relations.