The U.S. Has Been Averaging More Than 1 Mass Shooting Per Day 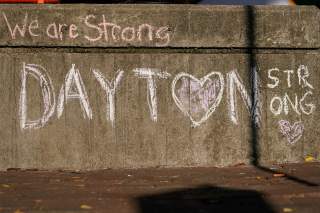 On Saturday, millions of Americans went to bed mourning the latest deadly mass shooting — this one in El Paso, Texas — and woke up the next day to news of a second, in Dayton, Ohio. The weekend carnage left at least 29 people dead, and plenty of indignation about Republican lawmakers who refuse to take up any meaningful gun reform, continuing to take money from pro-gun groups like the National Rifle Association.

In truth, however, there was nothing particularly remarkable about the close timing of these two attacks: the United States has been averaging more than one mass shooting per day for at least the past three and a half years.

According to the definition established by the Gun Violence Archive, which tracks every mass shooting in the country, a mass shooting is any incident in which at least four people were shot. And so far in 2019, there have been 255 such incidents. Monday, August 5 is just the 217th day of the year.

And yes, there’s already been a mass shooting today, in Brooklyn.

If current trends hold — and given Republicans’ resistance to any type of gun reform, there’s no reason to expect mass shootings to abate — 2019 will set a new high for the number of mass shootings in the United States. But it won’t be the first year on record to average more than one mass shooting per day — that distinction belongs to 2016, which saw 382 such incidents. The two years following were only marginally better, with 346 in 2017 and 340 in 2018. At the current pace, 2019 will close out a 4-year period in which Americans experienced more than one mass shooting per day.

The United States leads the world in the number of such mass shootings and gun deaths. Conservatives routinely point to small, European countries with comparatively tiny populations, where a single deadly incident can cause their death rate by mass shooting to spike. But in truth, no country of considerable size comes close to the United States in terms of the rates of mass shootings, or to our gun homicide rate. In the U.S., the gun homicide rate is roughly 33 per million people. In Canada, the number is 5. In the United Kingdom, it’s less than 1. In 2013, guns killed 32,888 Americans, either via suicide, homicide, or accidental discharge. The same year in Japan, guns killed 13 people.