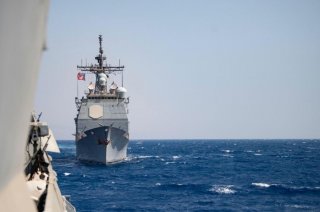 The Israeli Navy and the U.S. Navy's Fifth Fleet held an exercise in the Red Sea on August 31. During the exercise, the two navies practiced a variety of scenarios including defense and rescue operations, the Israel Defense Forces (IDF) said in a statement. This follows the U.S. Army’s Iron Dome Battery completing its first live-fire test. Israel delivered two Iron Dome batteries to the United States in the last year.

The two events, a naval drill and missile test, represent new heights of Israeli cooperation with the United States. The two countries are increasingly connected on a variety of defense issues. This is underpinned by the recent visit of Israel’s Prime Minister to Washington where he met President Joe Biden. As the United States enters an era after the twenty-year Afghan war, the U.S.-Israel relationship is expected to grow because of the unique defense technology abilities Israel has and the way Israel fits in with a U.S. worldview that eschews nation-building. In this sense, the U.S.-Israel relationship is a partnership that works well in the new world order.

The United States received the Iron Dome, which Israel has used successfully to intercept thousands of rockets over the last decade, after an August 2019 agreement. “The batteries were delivered in 2020 and have undergone a process of acceptance testing and operator training over the past months. The U.S. Army Iron Dome System (IDDS-A) is designed to defend supported forces against a range of threats including cruise missiles, unmanned aircraft systems, rockets, artillery and mortar threats,” Israel says.

Israel has a multi-layered air defense system consisting of four operational layers: Iron Dome, David’s Sling, Arrow-2, and Arrow-3. Israel has upgraded Iron Dome to confront Unmanned Aerial Vehicles (UAVs) and other threats in recent years. In the recent Gaza conflict in May 2021, the system had a ninety percent success rate. It has downed thousands of rockets. It has also intercepted Hamas drones. The United States has supported Israel’s development of these air defense systems for decades.

Meanwhile, the naval exercise, dubbed Noble Waters, saw the Israeli and U.S. navies working side by side, “learning together and strengthening the connection and familiarity of the two nations' fleets,” the IDF said on August 31. “The exercise marks the beginning of joint efforts between the Israeli Navy and the U.S. Fifth Fleet, as part of the transitioning of IDF matters to the U.S. Central Command (CENTCOM). This is the first exercise of many planned to take place in the future.”

This is important because Israel was previously seen as part of European Command. The move to Central Command has important implications relating to the U.S. posture in the Middle East. The United States and Israel are coordinating more closely on policies, such as concerns over Iran’s entrenchment in Syria. Israel also signed normalization agreements, known as the Abraham Accords, in 2020 with the United Arab Emirates (UAE) and Bahrain. Israel has new relations with Sudan and Morocco as well. This means that Israel is more incorporated into the Middle East security framework than in the past. Consider, for instance, that in the 1991 Gulf War Saddam Hussein tried to break up the U.S.-led coalition by firing Scud missiles at Israel to lure Israel into the war.

“Conducting joint exercises with our allies and partners around the world demonstrates the shared goal of protecting and monitoring international waters vital to international trade. The cooperation between the two nations' fleets works to this goal and further strengthens regional maritime security and stability. This partnership creates an opportunity for operational and professional development, and enables Israeli Naval superiority in the Middle East maritime arena,” the IDF said on August 31. Israel’s head of Naval Operations, Rear Admiral Daniel Hagari said that the “partnership with the Fifth Fleet is a strategic partnership for the security of the region and the State of Israel… This exercise marks the beginning of a cooperation that will expand and increase the scope of defense and security in the maritime arena to prevent terrorist activities."

Meanwhile, Israel took delivery of the Sa’ar 6 ‘Nitzahon’ corvette on Monday, one of a series of modern warships the country is receiving. Built in Germany, this is the fourth of four new corvettes that will defend Israel’s exclusive economic zone and also enable more projection of power into the Mediterranean. In a ceremony marking the arrival of the ship from Germany Israel’s Chief of the General Staff, Lt. Gen. Aviv Kohavi and the Commanding Officer of the Israeli Navy, Vice Admiral Eli Sharvit took part in a ceremony.

The Nitzahon, like the entire historic Sa’ar 6 fleet, is a tremendous addition in terms of Israeli naval superiority and a key pillar in the strategic capabilities of the Navy, the IDF, and the State of Israel. It is a great privilege. Be proud that you [the Navy] are a force of values holding strong to strengthen the independence of the people and the land, and to ensure victory of the State of Israel,” Sharvit said.

Other important developments are occurring in Israel as well. As Israeli prime minister Naftali Bennett went to Washington, Israel’s Defense Minister Benny Gantz prepared to meet with Palestinian Authority (PA) Chairman Mahmoud Abbas. They met on August 30. Minister Gantz told Chairman Abbas that Israel seeks to take measures that will strengthen the PA’s economy, according to the Ministry of Defense. “They also discussed shaping the security and economic situations in the West Bank and in Gaza. They agreed to continue communicating further on the issues that were raised during the meeting,” a statement noted.

Gantz also briefed sixty ambassadors from all over the world during a presentation called ‘Challenges and Opportunities that Israel and its Partners Face In a Changing Middle East,’ on August 25. He also met with Cypriot foreign minister Nikos Christodoulides in Jerusalem in August. Cyprus and Greece have become increasingly close partners with Israel. Along with the UAE, they want to break new ground on energy deals and they are growing security ties with Israel. Egypt, which is also close to Greece and the UAE, also sent its intelligence Minister Abbas Kamel, to Israel recently.

These series of developments, from the naval to air defense realm and strengthening regional security frameworks, represent a strengthening of U.S.-Israel ties. It comes as an opportune time because of the uncertainty that came in the wake of the Afghanistan withdrawal. There are some unanswered challenges. An Iranian drone attack on a tanker at the end of July led to the deaths of two crewmen onboard the ship off the coast of Oman. Assessments that Iran was responsible have not led to a response. At the same time, Israel is facing continued tensions in Gaza. This illustrates that despite the big picture relationships that are growing, the smaller asymmetric conflicts that Israel faces in the region continue.