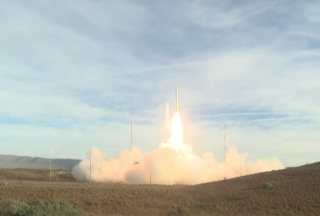 The United States Air Force tested a new intermediate-range ballistic missile this week. The missile blasted off from Vandenberg Air Force Base in California and headed west, into the Pacific Ocean. The still-unnamed missile was developed after the U.S. government accused Russia of cheating on the 1987 INF Treaty, which Washington later abandoned.

Preparations for the missile were detected the day before, when a NOTAM, or “Notice to Airmen” was put out for what was pretty clearly a launch from Vandenberg Air Force Base. The NOTAM warned of airspace hazards and the launch point corresponded with Vandenberg, which had not announced any scheduled launches. The NOTAM, and coordinates, were posted on Twitter.

The test apparently went off without a hitch. The missile traveled 500 kilometers--a distance formerly forbidden by the INF Treaty--before splashing down in the Pacific. According to Defense News, the test involved the U.S. Air Force and the Pentagon’s Strategic Capabilities Office, which specializes in taking existing technology and systems and repurposing them to take on new missions.

It’s not clear how the Pentagon put together a new missile so quickly. Pentagon officials told Defense News that the prime contractor for the test was Northrop Grumman Innovation Systems. Northrop Grumman builds a mock intermediate-range ballistic missile to test U.S. ballistic missile defenses. A logical start for building an IRBM would be a missile designed to replicate an IRBM’s performance.

There are few details about the missile itself. One example of an IRBM is the Pershing II, the American IRBM that was banned by the treaty. The Pershing II was truck mobile, two-stage missile with a range of 1,100 miles. The new IRBM will probably be similar in performance to the Pershing II, though with updated technologies such as GPS and improved inertial navigation systems. Unlike Pershing II, however, the new missile won’t carry nuclear weapons--at least for now anyway.

In 1987, the United States and the Soviet Union jointly agreed to ban ballistic missiles whose ranges fell between 500 and 5,000 kilometers. It was the first treaty to eliminate an entire class of nuclear-capable missiles. Russia voluntarily inherited the treaty after the collapse of the USSR.  In 2014 the United States accused Russia of violating the treaty with a new missile, an accusation made public in 2018. Russia pleaded innocence but the United States and NATO were not convinced, and the U.S. withdrew from the treaty in August 2019.

The United States has made due for decades without IRBMs, so why is it developing them now? One reason is the idea that Russia must be punished for violating the treaty, and that the U.S. must impose costs for treaty-breaking. Another is that the U.S. needs IRBMs to target Russian IRBMs in wartime.

A third reason unrelated to Russia is that China, not a signatory to the INF Treaty, has an arsenal of thousands of short, medium, and intermediate-range ballistic missiles. The United States can now counter-deploy its own missiles in the region, on the island of Guam or the Aleutian islands and target parts of mainland China. At least one U.S. ally in Asia is rumored to have agreed to host missiles. For Beijing, Russia’s choices have had definite consequences.

So far the death of the INF Treaty has not increased the number of nuclear weapons deployed by either Washington or Moscow. That may not hold, however, especially on Russia’s side, where aging tactical airpower could result in nuclear-armed IRBMs.