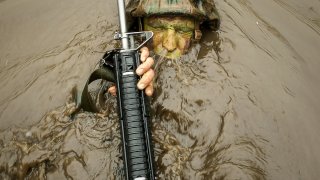 Legendary screen actor John Wayne is remembered for the plethora of “Westerns” he made during his lengthy career, and it is impossible not to think of the Hollywood star with his trademark cowboy hat and Winchester Model 1892 lever-action rifle. However, “The Cowboy Patriot” actually made his film debut in the World War I drama Four Sons, and then he went on to star in nearly a dozen “war movies,” including They Were Expendable, Sands of Iwo Jima, In Harm's Way, The Longest Day and The Green Berets.

The latter, which was directed by Wayne, was notable not only for “depicting Vietnam in terms of cowboys and Indians” as film critic Roger Ebert described it; but also for being the only film about the only film to have the full support of the U.S. military. Despite being a lifelong and openly vocal Republican, Wayne was able to convince President Lyndon B. Johnson and the United States Department of Defense (DoD) to provide material support.

While the film became a financial success, it was a critical failure but also failed to present the pro-military position for the war in Vietnam.

The veteran actor had always tried to shine a positive spotlight on the military, but in 1954 his effort to produce a movie about the Korean War—just a year after the “police action” on the Asian peninsula ended without a formal treaty—was nixed by the United States Marine Corps.

The Marine Corps Times, which quoted historian Lawrence Suid and his book Guts and Glory, reported that Wayne's effort to make a Korean War movie was killed because it was feared “the story would have a detrimental public relations effect for the Marine Corps.”

That was quite a turnabout considering that the Marine Corps had put Wayne and others through an abbreviated boot camp to make Sands of Iwo Jima, and even provided Republic Pictures with unrestricted filming access to Camp Pendleton, while an entire Marine battalion served as extras.

From the 1940s to the late-1960s the DoD was supportive of Hollywood-produced war movies, provided they be “an accurate and authentic portrayal” of the military. However, films couldn't negatively affect morale or military operations.

In August 1954, the Marine Corps Times noted Wayne wrote to Donald Baruch, who handled public affairs at the Pentagon, to request military assistance to provide a movie titled Giveaway Hill, which was set to begin production later that year. The story was meant to tell one of the Korean War’s bloodiest battles—the largely forgotten Battle for Outpost Vegas, which was between the armed forces of the United Nations Command and China in late March 1953, just four months before the end of the conflict.

Three outposts near the Main Line of Resistance (MLR) were called the Nevada Cities and named Vegas, Reno and Carson and manned by elements of the 1st Marine Division.

A surprise attack was launched by the Chinese forces on March 26 and it quickly overwhelmed the Marines defending Reno and Vegas. Nearly all the Marines defending the outposts were captured or killed. A UN counterattack was successful against Vegas but after four days of fighting, Reno remained in Chinese hands. The UN decision was to “give away” the area to the Communists forces, which gave the film its name.

Wayne requested that the crew and film stars be allowed to visit the 1st Marine Division sector and asked for material support. Given the past relationship the actor had with the military, it seemed all but a done deal.

However, Marine Corps Brig. Gen. Frank Wirsig reviewed the story and told Baruch there were serious concerns. Even the title of the project was at issue as it suggested a futility that could cause an unfavorable public relations reaction.

Whether Wayne was unwilling to make changes to the story that the Marine Corps objected to including the depiction of a Latino Marine who faced discrimination in the ranks—or if he simply lost interest in the project isn’t known. However, Wayne didn't follow through with the movie and Giveaway Hill was never made.

Six years later he did produce and direct the far more infamous military “last stand” with The Alamo, a film that became a personal obsession for Wayne.