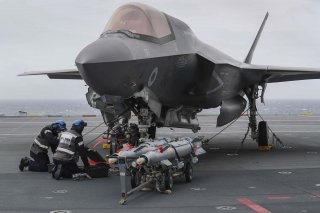 Attack circumstances were replicated and live weapons were used as U.S. Marine Corps and UK F-35s dropped high-explosive bombs in the North Sea off the coast of England as part of a first-of-its-kind collaborative war preparation drill.

The planes took off from a famous UK flagship vessel, the British aircraft carrier HMS Queen Elizabeth, with aircraft from the UK”s 617 Squadron and Corps’ VMFA-211 jets flying for three days, according to a statement from the British Royal Navy.

During the attack operations, planes from both countries dropped 500lb Paveway IV bombs onto a dedicated range. Commander Mark Sparrow Royal Navy, commanding officer of 617 Squadron, said the exercise began with high optempo deck operations on board the carrier.

“That was a springboard for the next phase, which was to load live weapons on the aircraft, which we had not done from HMS Queen Elizabeth before. It was an opportunity to end-to-end test all the systems within the ship and the squadron, from building and loading the weapons all the way through to successfully releasing them on target,” he said in the UK Royal Navy report.

Interestingly, the increased F-35 optempo, war preparations, deterrence and combat drills come as NATO sharpens its focus on the F-35 as a backbone for European defense. Such an emphasis appears to make sense given several distinct factors such as the growing number of U.S. F-35s being sent to Europe, the rapid arrival of greater numbers of F-35s throughout the world and of course the addition of Poland and Belgium as European F-35 partners.

Worldwide, more than 570 F-35s have been delivered and, along with the UK, the jet’s European footprint includes Italy, The Netherlands, Denmark, Norway, bringing the total number of European F-35-operating countries up to seven.

Added to this equation, a recent RAND corporation study specifically emphasizes the F-35 as an important area of focus regarding efforts to deter Russia. The research report, titled “At the Vanguard, European Contributions to NATO’s Future Combat Airpower,” calls for increased F-35 development, deployment, interoperability with 5th and 4th-gen aircraft and training for “operational cohesion.”

One of the study’s key recommendations is to “prepare fifth-generation fleets across NATO to undertake operations within the range of Russia's most sophisticated air defenses, and emphasize the suppression of enemy air defenses mission. Trainer aircraft should simulate the capabilities of the F-35 while exercises should feature realistic threat emitters and electronic jammers. Operational concepts for tracking, engaging, and destroying moving armored formations should be developed,” the report states.