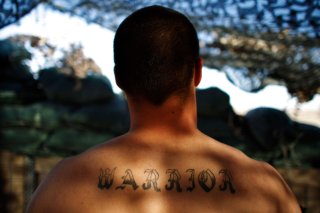 “The Marine Corps is currently considering making changes to its tattoo policy and we will update once the policy is complete,” Maj. Jim Stenger, a Marine spokesman, told Task and Purpose.

The first inkling of the change came from a Reddit post that shared a screenshot of an email attributed to Sgt. Maj. Rafael Rodriquez of Manpower and Reserve Affairs.

“This week, the updated [Marine Corps Bulletin] to the tattoo policy will be on the street,” the post said. “A lot of the restriction[s] were lifted… We will have one tattoo policy that covers both enlisted and officers.”

The email said that full sleeve tattoos, which were outlawed in 2016, will be authorized, although “the main issue will be the content of the tattoo.” There will also be no restriction on the number of tattoos that a Marine is allowed to have, although officers will not be allowed to have more than four visible tattoos.

In addition, “tattoos are not authorized C7 and above, no tattoos on the face, head, or hand,” with the exception of some ring tattoos. And those with a tattoo in the “V” portion of their neck will have to wear a crew neck shirt, according to the email.

Stenger told Task & Purpose that the information included in the leaked email is not the final determination of what the new policy will look like.

“I will say that all of this is pre-decisional right now,” Stenger told the site. “Something might be in a policy that has yet to be reviewed by the senior leadership that needs to review it. So whatever you’re seeing in that email, it might — and I emphasize, it might be — what’s in that current policy, but that might not be in that final policy and that happens often with policies that we’re generating.”

“Marines have inherited a legacy that we must honor and preserve for future generations of men and women bearing the title United States Marine, and that means meeting and exceeding the standards the American people have come to expect from our Corps,” then-Commandant Gen. Robert Neller wrote at the time. “The American people expect Marines to be disciplined, physically fit, and ready to accomplish any mission. They also expect Marines to possess esprit de corps and a squared away and sharp personal appearance.”