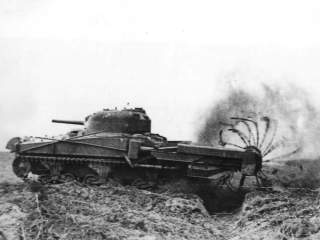 At dawn on June 6, 1944, the German troops defending the Normandy beaches glimpsed a terrifying sight.

Landing craft were disgorging M-4 Sherman tanks on the beaches. But these were no ordinary tanks: on their hulls were fitted rotating drums to which chains were attached. The chains flailed the beach, detonating any mines buried in the sand.

These were the legendary British “Crab” tanks of the 79th Armored Division, whose job it was to clear minefields. And now the U.S. Marine Corps is bringing back the Crabs, but with a twenty-first century twist.

The Crawling Remotely Operated Amphibious Breacher, or CRAB, will be a robot vehicle that will clear naval mines that threaten Marine amphibious assault troops. The Marines are developing CRAB as a  “submersible, remote-autonomous system with front-end equipment—including a mine flail, tiller and rake—capable of breaching or proofing amphibious assault lanes for landing forces,” according to a Marine Corps news release.

“The robotic crawlers will splash into the water from a littoral utility craft and travel along the seafloor to remove explosive and nonexplosive obstacles from the assault lane. Each CRAB is intended to be expendable.”

The surf zone, where waves break onto shore, is a challenge for amphibious landings because turbulent water makes mine detection difficult. The Marines currently rely on the Assault Breacher Vehicle—an M1A1 tank chassis with a mine plow, and Mine Clearing Line Charges, which are rocket-fired lines festooned with explosives. Neither system is designed to operate in the surf zone.

“The CRAB system is important because currently, the Naval Force can only breach in the surf zone with significant risk to mission or personnel,” said Capt. Anthony Molnar, a project officer for Marine Corps Systems Command. “This would alleviate that by having an inexpensive and expendable piece of equipment going through there.”

This illustrates one difference between the Sherman Crab and the modern CRAB. First used to detonate German minefields in the North African desert during the Battle of El Alamein, the original Crabs were based on a British Matilda and Valentine tank chassis with the turret removed. By 1944, the Americans and British had switched to the Sherman – complete with turret and a 75-mm cannon. Thus the Sherman Crab could fight as a regular tank, albeit somewhat awkwardly with its mine clearance gear.

“A report, issued about a week after D-Day, singled out the Crabs for high praise,” recounts author David Fletcher in his book about the Sherman Crab. “Not only did they manage to clear more than 50 percent of the required exit lanes from beaches, they also used their guns to considerable effect.”

Not that mine-clearing was ever easy for flail tanks, especially in wintertime. “Either the terrain was liquid mud that got plastered all over the tank and its crew, besides making the task of detonating mines more difficult; or it would be bitterly cold, freezing the crews even inside the tank and making the ground rock hard, which made flailing impossible,” Fletcher writes. “And then, of course, there was snow. This tank struck a mine, and then settled in the mud that later froze. Once the area had been cleared, it would be recovered and repaired.”

Now a robot will do the work. An unarmed robot, though it’s not hard to imagine an armed mine flail vehicle as in World War II (China already to have developed a robot amphibious tank).

Minehunting is hazard work. Better to leave it to the machines.