The U.S. Military Combat Trainer That Began As a Crazy Good PC Game 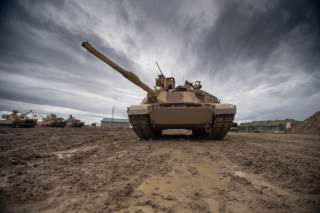 In 1993, Bruce Sterling traveled to the Army’s National Training Center in the Mojave Desert to write the cover article for the first-ever issue of Wired Magazine. The subject was the military’s use of new virtual reality technology to train US soldiers — and their commanders, all the way up the chain — to fight entire, integrated conventional wars without firing actual bullets. “Seamless simulation,” as the military planners called it, was “not a blue-sky notion,” Sterling wrote. “It's clearly within reach.” His prognostications came to fruition as the U.S. military turned to more realistic, comprehensive simulators to perfect increasingly complex net-centric warfare.

The simulators in Bruce Sterling’s article were gigantic devices, huge and lumbering. But as technology advanced and the military expanded its own secure intranets, the next step was to make networked training easier to use and deploy.

About the same time, in 1999, Czech software developer Bohemia Interactive began production on a military video game titled Operation Flashpoint: Cold War Crisis. It was complex and weirdly niche as such games went, not an obvious hit. But its demo disc got distributed with gaming mags — a behemoth (for the time) 60 Mb file on CD-ROM that became an instant hit among PC gamers. And by the first week of September, 2001, it was the best-selling PC game in the U.S., topping a bunch of Sims and Diablo titles, as well as Madden NFL 2002 and Microsoft’s ubiquitous Flight Simulator 2000.

The weighty demo was a master class in military friction. You started as a lowly NATO soldier tasked with attacking and repelling an entrenched Soviet invasion force on a fictional Eastern European island. After taking an initial village, a counterattack by T-72 tanks and BMPs forces you into a chaotic retreat. Isolated, you make for an extraction point where a Blackhawk helicopter is waiting to evacuate stragglers. Sneaking across terrain and dodging deadly Soviet foot patrols, you make the rendezvous, only to be shot down by a ZSU-23 shortly after take-off.

The full version of the video game got even freakier, featuring complex battles between infantry, armor, tanks, and helos in a dynamic environment. If you wanted to go off-mission to try and flank the enemy, you absolutely could… but there was a high chance that not working with your AI teammates would most likely doom the squad you commanded. Enemies in Operation Flashpoint were unforgiving in their accuracy and deadliness. You would die. Quickly. Over and over. Unlike arcade shoot-’em-ups, OF’s firearms were annoyingly accurate at realistic distances. On more than one occasion, I would clear a town or capture an objective, only to be knocked out by a rifleman 500 meters away.

Sales falling? Call in the Marines!

Unfortunately, Bohemia blew a pile of cash making an XBox version of Operation Flashpoint that it never recovered on the market. The game’s complexities (and the Xbox’s controller layout) were simply too much to parlay into a casual gaming platform.

Bohemia was inches from going bankrupt, but the U.S. Marines stormed in.

Bohemia in 2001 launched a separate production studio in Australia “with the mandate to develop ‘serious games’ based on the Operation Flashpoint game engine, for use as simulation platforms outside the entertainment sector of the commercial market,” as Bohemia executive Peter Morrison put it at the time. Uncle Sam’s Misguided Children became a key early customer; the Marine Corps picked up a program that would become known as Virtual Battlefield Simulation 1.

The original version of VBS1 was much less fun than the freewheeling civilian-run of Operation Flashpoint, possibly weighted down by bureaucratic requirements. But the militarized version of VBS1 was a different beast. Its point was to teach team dynamics in evolving tactical situations. It was (relatively) cheap, easy to use, and effective. Bohemia went on to crank out newer military simulators, creatively titled VBS2 and VBS3, and started up a relationship that continues today: The firm in 2017 inked a $12.8 million, five-year deal to maintain and upgrade VBS3 for the Department of Defense.

The military-gaming complex takes off

Bohemia Interactive eventually lost the rights to the “Operation Flashpoint” name after a falling-out with game publisher Codemasters and was forced to rename the civilian version of its game ArmA. “What matters is the game, not the name,” Bohemia insisted. ArmA took Operation Flashpoint and improved upon it. The resulting series ushered in a new era of realism for civilian enthusiasts and bored DoD personnel with high-powered gaming computers.

ArmA 2, beloved by hardcore military gear enthusiasts, eventually led to a fan-modified version of the game, the hyper-realistic survival simulation, Day Z. That multiplayer game went on to sell over 3 million units with a stand-alone release. In Day Z, your objective was to find food, equipment, and weapons, all the while dodging Zombies and dealing with fellow human players — who could be your best friends or lock you in a cage for entertainment.

So not only did the U.S. military pick up a failed Xbox game title to boost its wargaming; through its patronage, it also helped create one of the most unique zombie survival video games ever created. It just goes to show that, like zombies, hopes of salvation through military contracts never die, not even for videogame developers.