The U.S. Military Has Plans to Build Better Swarm Drones 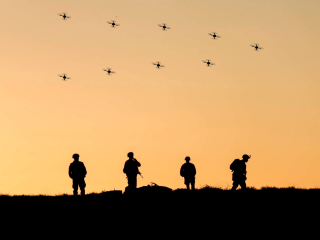 Key point: DARPA has a plan to make drone swarms more autonomous and secure from hacking.

The project seeks to develop a powerful, scalable distributed computer and software development environment that enables secure and trusted collaboration and processing across a heterogeneous mix of autonomous vehicles on low size, weight, and power, and cost (SWAP-C) commercial off-the-shelf (COTS) computer hardware.

There has been significant growth in autonomous vehicles and the proliferation of low-cost sensors and other internet of things (IoT) technologies, DARPA officials point out, yet few are designed with cyber security in mind.

Although U.S. military is taking advantage of these technology advances to create new and potentially game-changing military capabilities, these technological advances also introduce new attack vectors for adversaries to exploit.

DARPA is looking for methods to ensure that trust and security are designed into all aspects of the autonomous capabilities to include the platform, platform autonomy, sensors, computer processing, and communications to ensure warfighters trust the technologies.

This environment could be a combination of several techniques, coupled with formal verification, and a disciplined language for secure and trusted computing. The development language should enable rapid implementation of new missions and swarm tactics while significantly reducing the risk of introducing vulnerabilities.

The solution should address the encryption and authentication of all traffic among nodes by capitalizing on commercial encryption approaches. It should provide lightweight, mesh-network protocols with minimal overhead to reduce detectability, and defend against protocol-based attacks.

It should use open-communications protocols, but ensure that they are reliable in an intermittent communication environment and against protocol-based attacks. It should require tools that help the developer adhere to best practice for creating secure and trusted autonomy applications that capitalize on a distributed processing environment.

The environment and the language should accept new sensors, effectors, processors, and autonomous flight algorithms with minimal effort. The language should be open and easily incorporated into higher-level software tools. Autonomous vehicles in a heterogeneous swarm should be able to monitor each other for anomalous behaviors, and detect discrepancies that may not be detectable from one platform.

This project is accepting direct to phase-two proposals only. Proposers must demonstrate in-depth knowledge of secure and trusted embedded processing as it relates to IoT and autonomous vehicles. For this BAA, IoT is the extension of internet connectivity into physical devices and everyday objects.

When embedded with electronics, internet connectivity, and sensors, these devices can communicate and interact with other devices over the internet and can be monitored and controlled remotely.