The U.S. Military Looked at Using Nuclear or Chemical Weapons During the Vietnam War 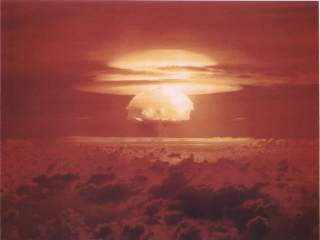 The date was January 1968, and President Lyndon Baines Johnson was still weighed down by the bloody quagmire known as Vietnam. Even as the Johnson administration and the U.S. military command in Vietnam were speaking of substantial progress against the Vietcong, President Johnson knew the war was going horribly wrong. The South Vietnamese government was corrupt, incompetent, and authoritarian; more than 11,300 American troops died during the previous year of combat; and while the Vietcong was getting mauled on the battlefield, the insurgency regenerated itself with more recruits.

On January 21, 1968, the U.S. Marines stationed at Khe Sanh began ducking for cover as a volley of enemy mortar and artillery fire slammed into their base. U.S. Commanding General William Westmoreland was confident American forces would hold the line. But in private, away from the glare of the American public, Westmoreland was also organizing a group in Tokyo to find out a way to deploy America's nuclear weapons stockpile to South Vietnam in the event the situation deteriorated. In a February 3 cable written to General Earle Wheeler, the Chairman of the Joint Chiefs of Staff, Westmoreland laid out his thinking: “Should the situation in the DMZ area change dramatically, we should be prepared to introduce weapons of greater effectiveness against massed forces.” Those weapons, in Westmoreland’s own words, could include nuclear as well as chemical weapons.

According to “Presidents at War,” a new book by presidential historian Michael Beschloss, President Johnson shut down the contingency planning as soon as he was briefed on it. In LBJ’s mind, holding Khe Sanh was not worth the risk of drawing China directly into the conflict.

While Beschloss's research is enormously jarring (imagine how history would have been written if a nuke was actually dropped on Hanoi or on advancing North Vietnamese and Vietcong troops), the events of February 1968 were not the first time Washington seriously reviewed the nuclear option. General Douglas MacArthur recommended the use of atomic weapons on more than one occasion during the Korean War. In December 1950 and March 1951, MacArthur requested broad authorization to treat nuclear warheads as if they were like any other weapon in America’s arsenal. While President Harry Truman never provided that authorization, he wasn’t entirely dismissive of the nuclear option eight it could prevent a disastrous defeat on the Korean Peninsula.

John F. Kennedy and Richard Nixon had their own dalliances with nuclear warfare. Kennedy never saw nukes as a particularly effective weapon, at least concerning offensive warfare: they were much too indiscriminate and caused too much collateral damage; the use of even a single device would compel the Soviets to retaliate with their own; and in the end, everyone would lose. The "better Red than Dead" motto was never far from the young president's mind. Indeed, when Joint Chiefs Chairman Lyman Lemnitzer confidently boasted that victory against communists in Asia was assured if nuclear weapons were part of the war plan, Kennedy rejected such thinking.

But Nixon was no Kennedy. More than once, the 37th president broached the possibility of using the big one in Vietnam to wipe out the enemy and shorten the duration of a war that was already politically unpopular. The Nixon administration went to work in 1969 producing policy recommendations to hit the Vietcong hard until it accepted a negotiated settlement. While the record is incomplete, then-National Security Adviser Henry Kissinger didn’t rule out the deployment of nuclear devices under specific circumstances. Three years later, Nixon told Kissinger he would rather use nukes than bomb North Vietnam’s power plants and docks.

Since the dawn of the nuclear age, American history is full of instances where the Commander-in-Chief or his military and civilian advisers at least contemplated the bomb in the course of hostilities. Fortunately, the nuclear taboo held up and the contemplation dissipated. The prospect of a worldwide nuclear holocaust was literally the nightmare scenario.

But this latest brush with history does re-open a debate that Congress, the executive branch, the national security establishment, and the non-proliferation community all engage in to this day: should there be an institutional check on a president’s power to order a nuclear strike, no questions asked?