The U.S. Military Might Have a New Way to Beat Iran's Missiles in a War 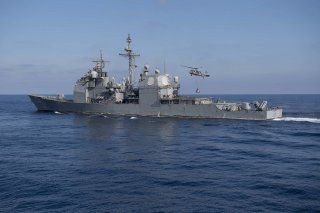 The Islamic Republic of Iran Navy (NEDAJA), the naval warfare service branch of Iran's regular military, has been involved in a true 21st version of "gunboat diplomacy" in its standoffs with the United States in the Persian Gulf.

This isn't new of course and has gone back to the 1979 Islamic Revolution in the Middle Eastern nation, but events became far more dangerous last week when President Donald Trump warned in a message on the social media service Twitter, "I have instructed the United States Navy to shoot down and destroy any and all Iranian gunboats if they harass our ships at sea."

That warning was echoed by senior Pentagon officials, who said that the President's tweet was a lawful order. "The President issued an important warning to the Iranians," Deputy Defense Secretary David Norquist told reporters last week.

Whether such a response is required still remains a matter of debate, but what is crucial is having an accurate and reliable early warning system that can spot and track the Iranian gunboats before these are a threat. Another concern for the U.S. Navy is an attack from missiles launched by the Iranian Islamic Revolutionary Guard Corps. The U.S. Navy has reaffirmed that it needs to be ready to attack or counterstrike if provoked.

"If we see hostile intent, we have the right to respond up to and including lethal force, and if it happens in the Gulf, if it happens in any way, we will respond with overwhelming lethal force, if necessary, to defend ourselves, and it's really that simple," explained General John Hyten, vice chairman of the Joint Chiefs of Staff. "But nobody should doubt that the commanders have the authority right now to respond to any hostile act or hostile intent."

Seeing the enemy before it could target U.S. warships is possible through the use of drones and other airborne early warning systems. But network technology could help create something akin to a "crowd-sourced" sharing of information from various naval assets.

FoxNews reported last week that Navy destroyers have been deployed with a system called Naval Integrated Fire Control – Counter Air (NIFC-CA), which is a networked weapon system that utilizes aerial sensors that included a Northrop Grumman E-2 Hawkeye surveillance plane or even other aircraft to find and pinpoint threats from beyond the horizon. Coupled with radar and communications technology, threat data and targeting information can be sent to ship-based commanders who can then respond accordingly. This could include the launching of SM-6 interceptor missiles to take out an approaching threat at a safer stand-off distance.

Navy weapons developers have upped their game when it comes to ship-based command and control, as well as with its ISR networking systems. This has allowed for the ability to receive and process incoming sensor data that could include live video feeds from drones as well as networked communications from helicopters, surveillance aircraft and other ships and submarines. However, the huge amount of raw data can also present new challenges.

It is akin to a "big data" problem where just analyzing it could be a challenge – one that could overwork and overload teams. Here is where artificial intelligence (AI) and machine learning (MI) could help automate the process, to ensure that it is a valid threat and not, in fact, something far less nefarious.

"This is a 'big data' problem that grows bigger every day," said Jim Purtilo, associate professor of computer science at the University of Maryland.

"The kill chain in a modern battle space is short," Purtilo told The National Interest. "The compressed time between an aggressor's decision to attack and the impact of his weapons makes a defender's decision process even more demanding. Can he recognize hostility quickly enough to evade or counter it with direct action? That age-old question is harder to answer in an era when weapons deploy at the speed of light (laser technology) or hypersonic missiles."

The more ability to get inside the aggressor's decision loop, the better the outcome for the Navy.

"This is why we work so hard on sensor technologies," explained Purtilo. "We want to know all we can. But that makes this a big data problem: the variety and volume of signals makes fusion into actionable information a computational nightmare. The danger is that we hide important needles under ever-bigger haystacks."

Purtilo emphasized that "battles tomorrow" will be won or lost by knowledge engineers working on the architecture for information fusion today.

"Something not mentioned is the full extent of the information problem," Purtilo told The National Interest. "What informs a defender's decision is not only the immediate signals data coming from blue forces in the region, but also insight that can only be harvested from national assets as they examine the control structure and leadership sentiment. Signals data are important, but you may view intentions differently depending on the deep backdrop of activities. Understanding this in real time is the real computational challenge."